I don't understand why Alberta and Saskatchewan feel so misunderstood and persecuted and hard-done-by all the time.
Fact of life: Canada's population is not fairly distributed across the country and it never will be. Most of our people live in Ontario and Quebec, with several million more in Vancouver. The Prairies have just 20 per cent of the country. 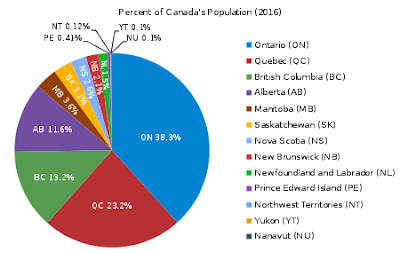 Fact of life: A quarter of Canada lives here - in the Ontario Golden Horseshoe: 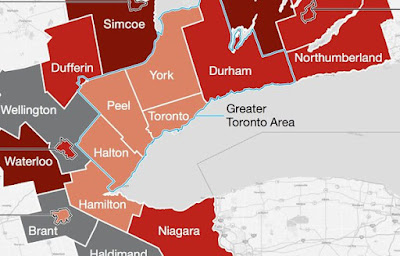 Fact of life: That's also where much of Canada's money is made, too - industry, banks, manufacturing, transportation, etc. -- though when it comes to the economy, this year the Prairies are actually expected to do a little better than anywhere else in the country: 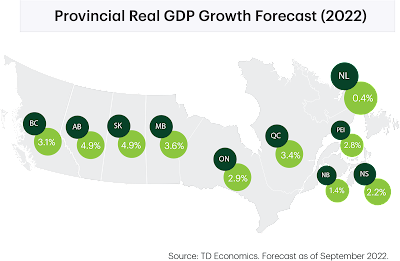 Alberta and Saskatchewan, quit yer bitchin'! We're not living in the Red Wedding, no matter how much our politicians want us to trash the East.  We are, actually, great places to live (for most of the year anyway) with friendly people, beautiful scenery, a terrific economy.
Please can't we just stop all this pissing and moaning and complaining?

“Smith has directed her cabinet ministers to look for federal "intrusions" into provincial jurisdiction, past and future, and create special resolutions that will be introduced and debated in the spring 2023 legislative session.”

But tell me again about how Trudeau is a dictator... #cdnpoli #ableg https://t.co/rm7IVaIf40

"The bill creates choice opportunities to ramp up hostilities before the provincial election set for next May 29." Ottawa has the power to disallow this bill. That's likely what Premier Smith wants. Come May 29th, she'd rather fight Trudeau than Notley. https://t.co/8WDxk9MgxR

The bill would "enable [the government of Alberta] to deem federal laws unconstitutional, allow it to make unilateral changes to provincial legislation, and direct provincial entities to ignore “harmful” federal policies."https://t.co/ajeANuNH6c

Here's a thread of all of the UCP leaders condemning the act:

Today, Danielle Smith and the UCP will introduce their disastrous Sovereignty Act.

Here are some things people have said about it. 🧵 1/15 #ableg #yyc #yeg #cdnpoli #abpoli

Kenny has now resigned his seat:

But here in Saskatchewan, this happened:

The NDP here are being questioned for their support of second reading of the Sask bill - not an impressive start for the new leader Carla Beck:

Those who voted Yea for the "Autonomy Bill" last night. No Nays for a bill based on sowing division, has misleading language, laughably wrong math, and ignores our Indigenous communities.

No excuses. Nowhere to hide.

The official opposition is no more. #skpoli #Saskatchewan pic.twitter.com/4LGkEG7oq0

You can't call something unanimous when the only MLA @BettyNippi who is a Status Indian did NOT vote to support the Saskatchewan First Act. @CarlaBeckSK thanks for undermining the treaty rights of all First Nations people. You might as well join the Sask Party. https://t.co/b2NnOPYhFI

Three University of Calgary law professors describe how the Alberta and Saskathewan acts play games with the constitution:

The Sask NDP may be ok with the bill, but First Nations are not:

As Vice President Métis of the Indigenous New Democrats of Saskatchewan, I will tell you our wing was also not consulted.#skpolihttps://t.co/yhOxVzRp2E

Meantwhile, back in the real world, where real people live:

To the families of the victims in James Smith Cree Nation, and to the survivors: Thank you for your time today. We will never forget the stories you shared with us about the people you loved so much. We will remember them – and we will continue to be here for you. pic.twitter.com/krEYkGTVFV

‘Canadians are mourning with you.’

Posted by Cathie from Canada at Wednesday, November 30, 2022

Very disappointed in the SK NDP. What the hell were they thinking backing an unconstitutional bill that's bad for their constituents?! You're not going to peel off any Moe supporters by going along with this farce and you demotivate your own supporters. Start acting like an opposition party instead of the Big Oil backup singers.

I think I agree -- I'm not sure because I haven't heard why they did it but "fear of being ridiculed by the Sask Party" isn't a credible motivation even if you keep saying "but it was just second reading!"
And I wonder how much bullying the Leader's Office had to do with their own members, to force them to either vote in favour or not show up at all?

I think my departed moms "just a dog in the manger" comment would best apply to Cherokee Dan Kolodnicki.
Though in her defense she is just the next dog offered by the UPC for that particular manger and in the Alberta kakistocracy being "a dog in a manger" seems to be one of the main requirements for ministerial office.
Delusion is a hot second tho. Dani with her assimilated false Cherokee/Ukrainian heritage of convenience added to being in the most discriminated and abused group (non vaxers) gets the triple crown of victimhood added to poor (very rich except for blue mismanagement) Al waa wa alberta and dear dani is the empress with no clothes.
Masks?... they are still angry pants are mandatory.

You're right Cathie, the vote appears to have been whipped. Look, I get it, a lot of people have oil and gas jobs, and Estevan still breathes coal dust. But the party's got to be more than a door mat. It would be dead easy for the ON NDP to go along with Ford's scheme to allow construction in the protected greenbelt around Toronto. A lot of good, unionized construction jobs hang in the balance. But they voted against it and asked the auditor general to look into what appears to be Ford rewarding his rich, developer donors at the expense of the environment.

Like you say, fear of ridicule by right-wing extremists isn't a credible motivation for giving legitimacy to crooked power grabs. As Kaitlyn Harvey said, “No opposition, no amendments, no motions, no public opposition, no press releases, no consultation, nothing,” is a bad look for the NDP.