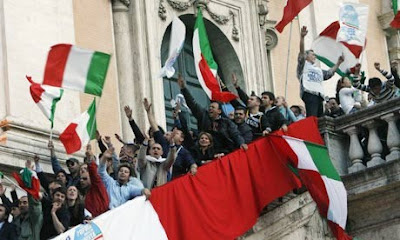 Is anyone paying attention to the rapid lurch of Italy into full-blown Fascism these days?

The extreme-right government of Silvio Berlusconi is now in its second incarnation. It's been in the news recently for rounding up Roma ("Gypsies") for fingerprinting, and threatening to take away their children. Berlusconi himself has hijacked the political process by just passing a law to exempt himself from on-going prosecution on charges of corruption.

Fascism has once again gained a stronghold in Italy. The new mayor of Rome, Gianni Alemanno, a former member of a neo-Fascist youth group, Fronte della Gioventù, (associated with the Fascist political party Movimento Sociale Italiano) was elected a few short weeks ago, to rousing chants of "Duce! Duce!" from his squadristi. Berlusconi welcomed his election, proclaiming, "We are the new Falange."

Meanwhile Berlusconi's Northern League henchman, Umberto Bossi, has already proclaimed, "Non so cosa vuole la sinistra, noi siamo pronti, se vogliono fare gli scontri io ho trecentomila uomini sempre a disposizione." ("I don't know what the Left wants, but if they want to take us on, I've got 300,000 men at my disposal.") And then, getting straight to the point, "I fucili sono sempre caldi." ("Our rifles are always hot.")

A beady gaze had already been cast upon homosexuals under this Mussolini nuovo. Did you know that gays can't drive? Somehow that was never part of the stereotype for me, but a gay man in Italy was forced to re-take his driver's test and then was issued with only a one-year permit, because of his "sexual identity disturbance" ("disturbo del comportamento sessuale"). Both the Ministry of Defence and the Ministry of Transport were involved. A court in Sicily (the courts have not as yet been purged) has just awarded him €100,000 (about $157,000) in damages.

And needless to say, our "conservatives" love him. More ideological slippage? Or is Fascism, as I've said before, just conservatism with the gloves off?