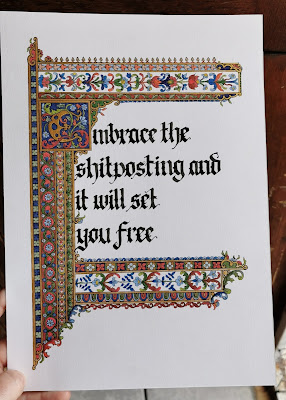 I loved this! Found it on Mastodon, hand-made by @welshpixie@mastodon.art
Tonight the world of Twitter waited with bated breath for Musk's big Hunter Biden reveal. Pffft (a wet sqibb sound)!

Elon Musk and Matt Taibbi tag-teaming to do the most ponderously vacuous thread on Hunter Biden this side of Truth Social is like the O.J. chase if the Bronco were going 7 mph slower

If I may do a @brianschatz: the most interesting revelation about Hunter Biden is that the wife of a Supreme Court justice was actively involved in a plot to overthrow the results of a presidential election, and that justice is going to hear cases related to that plot.

What a pointless attempt at "got-ya!" journalism.
Moving on, here is some good stuff I have collected recently from Twitter and from Mastodon:
First, this is absolutely right-on!

A dazed & confused debut for the new Sask United Party!
Last spring Wilson had to sit as an Independent because she lied about being vaccinated. Now she is "somewhat surprised to learn she is the party’s new leader."https://t.co/iGRVgOtCiz via @TheStarPhoenix

Turning to the latest on Ukraine, this was good news:

And some funny stuff:

Comedians are among the last truth-tellers we have now.

By tacitly approving Kanye West's tweet of a swastika inside a Star of David, Elon Musk has basically written off "advertising" as a source of revenue for Twitter.

I *just* used this example telling my wife why Musk is in the middle of such a shitshow. This is the first time where others will simply do what he says (which engineers at SpaceX and Tesla, for many reasons, including USG subsidies, can't just do).
"Turn that off!" "Okay." https://t.co/CtPz01Ubus

I've never seen this breed of dog before pic.twitter.com/TTjGzwZRQa

This is Jetty. He never wants to hear you complain about his barking again. 13/10 pic.twitter.com/6n7Jh45Dsu

Does anyone else smile at dogs when they walk past them, or am I just a weirdo? pic.twitter.com/Q3wJU2gHZS

I loved this - the Pirates messed up and Baez took advantage of every error:

This is something he did, and it still mesmerizes me to this day. pic.twitter.com/tMd92aagtX

I hadn't seen this one before either:

This has been around for a while, but only recently come to my attention. It helped start my week off with a smile, hoping it spreads some joy to others. 😊https://t.co/DY30T7FmJn pic.twitter.com/GEScbGBLb5

George Takei is an international treasure:

When I turned 70, I thought, well that’s it. I’ve had a great career, but it’s winding down.

Boy was I wrong. I found social media, and then a second wind at my sails in my 70s! I made my Broadway debut at 78, and I’ll make my London debut at 85.

Life is wonderful and magical.

Dozens of Pacific white-sided dolphins put on quite the show for BC Ferries passengers, breaching the water with small jumps as they kept pace with the large vessel. https://t.co/NfOwa4Fvbe

Posted by Cathie from Canada at Saturday, December 03, 2022