Today's News: The Beginning of the End?

Three stories tonight seem to have the same theme -- that it may be the beginning of the end for Pierre Poilievre, for Elon Musk and for Donald Trump.
First, for Pierre Poilievre:
Evan Scrimshaw analyzes the Angus Reid poll tonight, comparing Poilievre at 3 months to the other Conservative leaders, and it is NOT good news for PP. 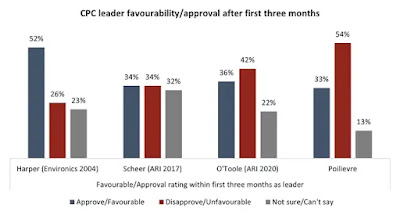 ...The more notable thing here is clearly not just the net approvals, but the story is actually just about how stable the pool of people who generally like the Conservative leader is.
... the Tories have traded voters in specific­ – they’ve traded well off social liberals in the Horseshoe for cultural conservatives in what would have to be crudely referred to as the “regions” – Northern Ontario, non-urban BC, and Atlantic Canada – but in aggregate the Tories are stuck in the same place.
...Even beyond the fact that the membership pick shit leaders, the existence of the membership makes the list of candidates pretty shit, because talented people don’t run knowing they’ll get some pittance of the vote. Would a Conservative Party led by Lisa Raitt have won the 2019 election? I don’t know, but I do suspect that she would have done a lot better than Andrew Scheer...
... If the Tories win the next election it’ll be because the Liberals run out of gas – which, honestly, I just don’t see. The deal with the NDP has breathed new life into the, yes often slow responding, policy ambitions of this government...
... If Poilievre becomes PM it will be in spite of himself, and the idea that Poilievre’s personal popularity and cult of personality will see him into office is for the birds. His only hope is the Liberals just completely lose control of the car...

I thought this was a perceptive analysis too:

Two things happen the more progressive a leader is: (1) it sets off a kind of existential dread in the right and coalesces them and (2) it creates a split of “progressives” into two camps … one of whom was bitterly disappointed in the results.

Elon Musk has been CEO of Twitter for 54 days. That’s 1.23 Liz Trusses or, if you prefer imperial units, 5.4 Scaramuccis.

Unfortunately, tonight Musk seemed to be changing his mind about leaving as CEO.

Like most people I thought when Elon started that poll that it was part of some planned exit for him - but reading this pretty good analysis and combined with his silence, maybe he just, like, did it, because, I dunno, why not? https://t.co/sZfZg0BK4r

Maybe he is just determined to go down with the ship:

There's an article to be written about how silicon valley types think they know how to run media companies, never really do, and it usually ends badly for everyone.

And, coincidentally, here is one such article - at The Liberal by Tom Watson, the article Shoot Out The Lights says:

...In this digital era, now in its fourth decade, platforms have come and gone with regularity. Twitter will be the latest, unless Musk decides to offload it and cut his massive losses to reputation and fortune. Prodigy is long gone. CompuServe and AOL as well. Delphi, Pipeline, the Well, Pathfinder, MySpace, GeoCities - I could be here all day. Yet as we consider the role of large digital media platforms to the challenging future for a liberal democracy, we shouldn’t just write off Musk as another Howard Hughes, who lost his mind and almost everything else.
As Tom Nichols put it in The Atlantic, “He has purchased an important and influential piece of the public square not to enhance public debate, but to punish people who annoy him.”
...Twitter is a communitarian product. Most of its signature features were created by its own users. The “retweet?” User created. Hashtags, threads? The users. Plus Twitter is basically an intellectual product of that usership - it’s valuable not because of the 80 percent who hardly tweet at all, but because of the 20 percent who do all the tweeting and make all the news. Big names, medium names, popular on Twitter only names. It’s a huge and unique news infrastructure, in my view an irreplaceable one. Musk and his inner circle don’t understand Twitter’s inherent value. They believe it’s biased toward a liberal point of view (which, if protecting users from conspiracy theories dangerous to public health and threats of violence from extremists is liberalism, okay).
Musk is in thrall of a crowd of bullying cretins whose reason for breathing is “owning the libs,” a by-product of their own unhappiness with life and what it offers. But the libs won’t be owned, as it turns out. They’re leaving, for places like Mastodon and Post and Substack. They won’t worship at Musk’s altar - indeed, they detest the ground upon which he trods. At this point, that will never change in his lifetime. He’s finished as a “save the world” kind entrepreneur. That stored value is deader than crypto.
As an institution that’s important to American life (and to some degree, globally as well) Twitter is already in its death throes. Musk moved more quickly than even I thought possible, and I thought he’d kill it. Last night he started a Twitter “poll” about whether he should stay on as CEO. More than likely, the bailout he’s looking for has not materialized. Maybe it will be for the best. We need some new platforms. I need to write longer form pieces like this one.
And we all need a world in which Elon Musk has no relevance whatsoever.

Third, for Donald Trump:
The January 6 Committee released its Executive Summary today (link to a gift article for my readers) which detailed its accusations against Trump included crimes of insurrection, conspiracy to defraud the United States, and obstruction of Congress, as they referred him to the Justice Department for potential prosecution.
The NYT also writes:

The summary laid out step by step how Mr. Trump sought to cling to power, much as the committee did during its televised hearings in the summer.
First, the summary said, Mr. Trump lied about widespread fraud, despite being told his claims were false. He then organized false slates of electors in states won by Mr. Biden as he pressured state officials, the Justice Department and Vice President Mike Pence to overturn the election. Finally, he amassed a mob of his supporters to march on the Capitol, where they engaged in hours of bloody violence while Mr. Trump did nothing to call them off.

Referring Trump to the Justice Department is a much more important issue for America right now than whether Twitter collapses:

You are living through the largest longest coordinated rightwing propaganda campaign and hostile takeover attempt in the history of humanity. Because trump needs you to fight a civil war so he doesn’t have to go to prison for his abuse of power and obstruction and attack on you. pic.twitter.com/gXjQrxZowW

After watching the Jan 6 committee today, my overwhelming reaction is just how profoundly sad it is that Donald Trump was POTUS.

Finally, here is some good news from Ukraine:
These were both great to see:

Rxssians keep trying, but they can’t take magic away from us. The #Christmas lights are up in #Kyiv, powered by a generator. #Ukraine is unbreakable. #StandWithUkraine pic.twitter.com/2RkoS35pne

amid total darkness, ukraine lights up a giant menorah at the country’s main square in kyiv to celebrate hanukkah — russian terrorism won’t break these people

Posted by Cathie from Canada at Tuesday, December 20, 2022