Keeping up with the Ukraine War 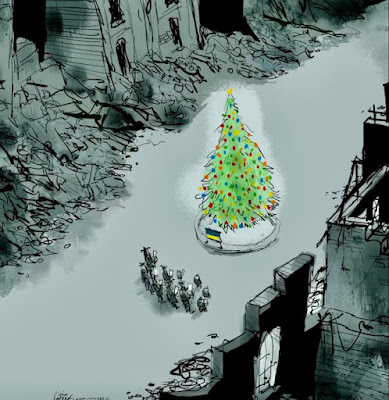 The resilience and courage of the Ukraine people is one of the most inspirational events our society has ever seen.
This New York Times photo essay Ukraine Under Attack: Images from the Russian Invasion shows what Ukrainians have had to endure: 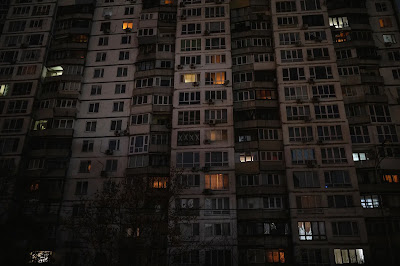 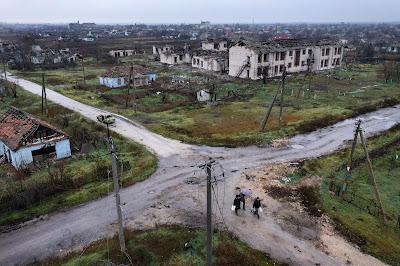 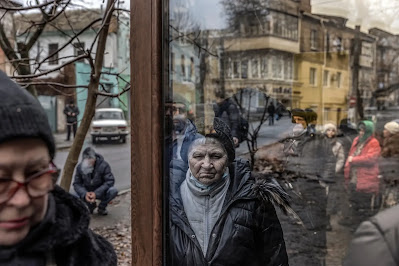 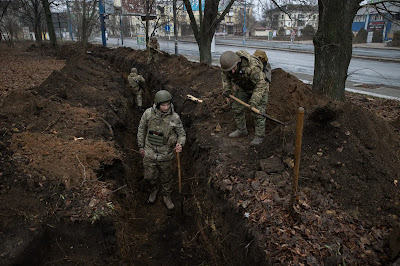 Shattered towns, mass graves and suffering beyond measure greet the Ukrainian forces steadily pushing back Russian troops, revealing the civilian and military toll of the war and the invaders’ occupation in the east and the south....
The slow-moving war of summer, waged with long-range artillery that flattened whole towns, has given way to rapid Ukrainian advances.
But for Kyiv’s forces, the elation at retaking territory seized by the Russians is tempered by the brutal cost, both in and out of their own ranks, and by the knowledge that a large part of Ukraine remains in Moscow’s hands.
This, then, is what winning now looks like: ruined buildings, crumpled bridges, burned-out vehicles and depopulated places where the few residents who remain look haunted, many of them older, hungry, sick, cold. And everywhere, there are bodies — dead soldiers and civilians, in hastily dug graves, in blasted cars or just lying out in the open...

That photo of the Kyiv apartment building during a power outage is also the perfect illustration for this great Atlantic article titled Ukraine Unplugged by Veronika Melkozerova, which describes what it has been like during the last two months as Kyiv endures multiple power outages:

...Although our soldiers live in much harsher conditions than civilians do, they at least have weapons to fight back. The only weapon we have, amid regular power cuts, rising prices, and diminishing resources, is our endurance...
Moscow has been hoping that the unbearable living conditions it has forced upon us will break our resolve. But we know whom to blame for our new life. As Zelensky has said, if we must choose between having electricity and living free of Russian domination, we will pick the latter.
These were my thoughts while my husband was teaching me how to play chess during one blackout late last month...
...Until recently, I had never thought about the difficulty of maintaining a civilized modern society in total darkness. We got used to having everything we needed....
Now, in the dark, I understand that I actually need much less than I thought.I, too, have grown accustomed to the darkness. When the light goes off, I work on my chess skills or listen to the radio, falling more in love with my country day by day. We are no longer afraid of the dark, because we know the monster lurking in it. It will win if it breaks us. And we can’t let that happen.

💔 This little boy from Sloviansk in the #Donetsk oblast received a gift from St. Nicholas for the first time.

He lives with his grandparents in the basement, hiding from the bombs.

Also in the Atlantic, Anne Applebaum describes The Brutal Alternate World in Which the U.S. Abandoned Ukraine:

...Let’s imagine, just for a moment, a world without Ukrainian courage, or American and European weapons, or the unity and support of democracies around the world.
Had the Russian plan been carried out as it was written, Kyiv would have been conquered in just a few days. Zelensky, his wife, and his children would have been murdered by one of the hit squads that roamed the capital city. The Ukrainian state would have been taken over by the collaborators who had already chosen their Kyiv apartments. Then, city by city, region by region, the Russian army would have fought the remnants of the Ukrainian army until it finally conquered the entire country. Originally, the Russian general staff imagined that this victory would require six weeks.
Had all of that happened as planned, Ukraine would now be pockmarked with the concentration camps, torture chambers, and makeshift prisons that have been discovered in Bucha, Izyum, Kherson, and all the other territories temporarily occupied by Russia and liberated by the Ukrainian army. A generation of Ukrainian writers, artists, politicians, journalists, and civic leaders would already be buried in mass graves. Ukrainian books would have been removed from schools and libraries. The Ukrainian language would have been suppressed in all public spaces. Hundreds of thousands more Ukrainian children would have been kidnapped and transported to Russia or trafficked farther around the world.
Russian soldiers, strengthened by their stunning victory, would already be on the borders of Poland, setting up new command posts, digging new trenches. NATO would be in chaos; the entire alliance would be forced to spend billions to prepare for the inevitable invasion of Warsaw, Vilnius, or Berlin. Millions of Ukrainian refugees would be living in camps all across Europe, with no prospect of ever returning home; the tide of sympathy that originally greeted them would have ebbed long ago; the money would be running out, the backlash under way. The Moldovan economy would have collapsed entirely; a pro-Russian government in Moldova would perhaps already be planning to incorporate that country into the emerging Russian-Belarusian-Ukrainian federation that one Russian propagandist hailed, too early, on February 26.
This disaster would not have been confined to Europe. On the other side of the world, Chinese plans to invade Taiwan would be well under way, because Beijing would assume that an America unwilling to defend a European ally, and now totally bogged down in a long-term battle against an emboldened Russia, would never go out of its way to help an island in the Pacific. The Iranian mullahs, equally cheered by Russia’s success and Ukraine’s defeat, would have boldly announced that they had finally acquired nuclear weapons. From Venezuela to Zimbabwe to Myanmar, dictatorships around the world would have tightened their regimes and stepped up the persecution of their opponents, now certain that the old rules—the conventions on human rights and genocide, the laws of war, the taboo against changing borders by force—no longer applied. From Washington to London, from Tokyo to Canberra, the democratic world would be grimly facing up to its obsolescence.
But none of this happened. Because Zelensky stayed in Kyiv, declaring that he needed “ammunition, not a ride”; because Ukrainian soldiers repulsed the first Russian attack on their capital; because Ukrainian society pulled together to support its army; because Ukrainians at all levels were creative in their use of limited resources; because Ukrainian civilians were, and are, willing to endure terrible hardship; because of all of that, we are not living in that ugly, alternate reality.
Because they were inspired by those first weeks of Ukrainian courage, President Joe Biden and the U.S. Congress resisted the temptation of “America First” isolationism and rejected the cult of autocracy that now captivates a part of the American right. The leaders of Europe—with the sole exception of the Hungarian prime minister, Viktor Orbán, one of the chief ideologues of that same cult—also resisted carefully targeted Russian disinformation and blackmail campaigns and agreed to support Ukraine with both military and humanitarian aid. People around the world saw the Ukrainians stand up to a brutal dictatorship, and volunteered their time and their money to help.
Because of everything that all of us did together, Kyiv still stands. Ukrainians still control most of Ukraine. The massacres, the executions, the mass violence planned by the Russians did not take place in most of Ukraine. The legend of Russia’s military prowess has been shattered. China and Iran are roiled by unhappiness and unrest. The democratic world did not collapse but has instead been strengthened. As the Ukrainian president said last night, we “succeeded in uniting the global community to protect freedom and international law.” Zelensky came to Washington to thank Americans on behalf of Ukraine, but in truth, it is we who should be thanking them.

For keeping up with the news about the Ukraine Russia War, here are the best sources I have found:
Adam Silverman does excellent nightly posts on Balloon Juice, in a series titled War for Ukraine, Day...
Daily Kos has consistently excellent daily pieces on Ukraine, by Markos, Mark Sumner, Hunter and several others.
Analyst Phillips O'Brien has an excellent substack Phillips's Newsletter as well as good Twitter threads.
Malcolm Nance usually talks about US intelligence issues in his substack Special Intelligence, but he has been fighting this year in the Ukraine Foreign Legion.
On his daily roundup of Canadian political news, Routine Proceedings, journalist Dale Smith also usually provides a summary of each day's Ukraine news.
Josh Marshall set up two Twitter lists in February that are consistently worth following - 2022 Ukraine Crisis and Ukraine Military Analysts.
I also have some other analysts on my own Ukraine twitter list, called Putin's War
I also follow The Hoarse Whisperer's list Ukraine Coverage.
Posted by Cathie from Canada at Wednesday, December 28, 2022