Some things to think about, when you have a minute... 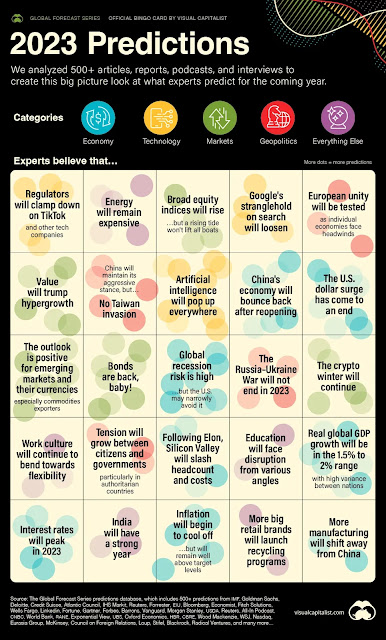 Here are some predictions for 2023 from Visual Capitalist
Here's something else to ponder:

When you’re Godzilla every city is a walkable city

I found this at Garbage Day where Ryan Broderick's latest post is The Doomscrolling is the Point.  He is writing about how Twitter is deteriorating as more awful people get back on it, but that we have apparently all decided to keep on using Twitter even as it fails - yes, I know I have, just because I cannot get either Post.News or Mastadon or Tribel or CounterSocial to save, list or embed posts in this blog as easily as I can do this from Twitter (though I am liking Post.News more every day.)
Broderick also provides this handy metric for us to keep track of Twitter's downfall:

...I’ve found the best way to track the deterioration of Twitter is through how many times in a given week I’m forced to see content from the Taliban.

Speaking of Twitter, has anyone else noticed that "Latest Tweets" has now been renamed to "Following"? I'm not sure why and its not worth asking:

There's 2 people working there... ask the other guy https://t.co/aWSVj8mWlx

But that's enough about Musk for now.
Here's some amusing reactions to the passing scene:

Finally, here are two more uplifting pieces -- about the human drive for exploration and science, along with the shared humanity of our courageous hearts.
In The Warning, Steve Schmidt describes A Nation of Explorers:

The Earth’s greatest living explorers are the four surviving Americans who have walked on the moon, and a 56-year-old retired US Navy Commander Victor Vescovo....
Commander Vescovo discovered two of the most storied warships in the history of the United States Navy. Both were sunk in ferocious combat against overwhelming odds.
He has found the final resting places of the USS Samuel B. Roberts (DE-413) and the Fletcher class destroyer USS Johnston (DD-557). Both ships were part of “Taffy 3,” the outnumbered US Naval Task Force that made a suicide charge against an overwhelmingly superior Japanese battle fleet, that included the largest battleship ever built, the Yamato. The battle was memorialized in “The Last Stand of the Tin Can Sailors.” It is an outstanding book.
The Samuel B. Roberts was discovered in 22,621 feet of water, while the Johnston was discovered 21,181 feet deep. Eighty-nine officers and men went down with the Roberts, while 186 men, including Captain Ernest E. Evans from hardscrabble Pawnee, Oklahoma.
Commander Ernest Evans was 36 years old when he took command of the Johnston in 1943, and this is what he said: “This is going to be a fighting ship. I intend to go into harm’s way and anyone who doesn’t want to go along should get off right now.” The Annapolis graduate was three-quarters Native American and known as “Big Chief.” He is one of the most heroic warriors in American history.
When the Johnston and Samuel B. Roberts both charged the Japanese fleet, the Captain of the Roberts addressed his sailors. He told them that they were in a fight against overwhelming odds and survival couldn’t be expected. He said they would attempt to do “as much damage as possible.”
They did their duty and turned back the Japanese fleet, which was coming to attack the American landing beaches. The brave men of the USS Samuel B. Roberts and USS Johnston are missing in action no more. They are discovered and at rest.
The United States of America is blessed to be the home of humanity’s greatest explorers. Exploration in space, cyberspace and across the frontiers of medicine, energy, technology and artificial intelligence will write a future that is unimaginable — though in the broad sweep of time is just seconds away from the invention of electricity.
Seventy per cent of Earth is covered by her oceans, and it is an astounding fact that 25 per cent of the world’s sea floor is already mapped. It will be completely mapped by the time we reach the century’s midpoint. Yet, the age of discovery is just now beginning. That is why this is the greatest time to be alive in the history of human civilization. There has never been a moment where current ignorance of all things stands so ready to take a giant step forward — whether America’s ludicrous politicians are ready or not.
Everything in America isn’t broken. Men like Victor Vescovo and Ernest Evans have always proved that. Our Kevin McCarthys are our exceptions, not the rule.

Finally, here is a post from Post.News, by Patrick S Tomlinson, titled The Biggest Story of 2022 (Or Any Other Year)

With everyone doing their year-end and best of lists, I thought I'd thrown mine in the ring. And it's a big one. Maybe the biggest of all time.
Something happened this year for the first time in all of human history and nobody seems to have noticed.
Humanity passed through a Filter.
Let me explain. Among astronomers and associated science nerds, there's something called the Fermi Paradox. The Fermi Paradox isn't so much a paradox, but a question: If life is common in the universe, then where is everyone? Why have we seen no evidence at all of intelligent alien civilizations? If another civ anywhere in the galaxy had even a 5 million year head start on us it could have spread across the entire galaxy by now.
So, the thinking goes, where the hell is everyone?
That's where the Great Filter theory comes in to try and answer. The Great Filter posits there are numerous Filter events along the development of intelligent life that weed out almost everyone.
Many of these proposed Filter events already lay in our past. The development of simple, single-cellular life in the first place might be relatively rare or short lived. Once simple life exists, moving from prokaryotic to eukaryotic cells (cells with a nucleus) may be rare.
Simple single cellular life developing into complex, multicellular life with specialized cells and organs took billions of years on Earth. It might not happen much at all. Moving from complex life to what we consider intelligence may be another filter.
Intelligence turning into technological advancement is another hurdle. Think of dolphins, undeniable intelligent, but without hands to craft or fire to forge, they will never build a radio, much less a rocket.
With each new roadblock, the number of species that get over the hump shrinks enormously. We have overcome all of these filter events to become the only intelligent, technologically advanced civilization we know to exist, anywhere.
But, and it's a big one, what if the filter that kills most civilizations is still ahead in our development? There could be many. Maybe technological civilizations are inherently self-destructive. Maybe they end up nuking themselves, or genetically engineer weaponized plagues escape their labs, or they exploit their planet's resources and trigger runaway, irreversible climate change. Or AI. Maybe tech is a death sentence.
But also, there's the ever present Filter of global scale natural disaster. 65 million years ago, an asteroid ended the dinosaurs' bid to achieve intelligence, even as many of them such as pack hunting velociraptors were showing signs of being very clever indeed.
THAT'S the Filter we passed through this year. When NASA's DART mission successfully smashed into Dimorphos and changed its orbital period by more than half an hour, it wasn't just fuckin' metal (but it was also fuckin' metal), it proved our technological advancement and proficiency have grown to the point that we can not only detect but PREVENT a planetary catastrophe.
Every other Filter we've passed through has been thanks to evolution. This is different. For the first time in the history of life on Earth a species has used its minds instead of mutations to anticipate and defeat a Filter.
It took 3.7 billion years to come to fruition, and it happened this year. You were alive to see something than never happened before.
Now the only thing that can kill us, is us. Heading into a New Year, I find that thought as comforting as it is terrifying.

Posted by Cathie from Canada at Thursday, January 12, 2023