And the medal in pearl clutching goes to...

What is with American reporters? Ever since the "wardrobe malfunction" they act like a bunch of blue-nosed church ladies, while the rest of the world just laughs at them.
First they flip out about the "scandal" of Scotty Lago and his medals party:

...photos surfaced in the media that showed the 22-year-old athlete hanging his bronze medal over his groin area . . .
Another photo reportedly shows a woman kissing the medal on a public street.

On a public street!!! OMG ! Here's what all the fuss was about:

Oh, the horror! How dare a 22-year-old athlete get it on with a girl!
The US media had spoken, so of course this medal-winning athlete had to creep home in disgrace.
But then the US reporters seemed to think that everybody else should be just as scandalized as they were by athlete behaviour.
They couldn't stop talking about Jon Montgomery carrying a mug of beer around Whistler 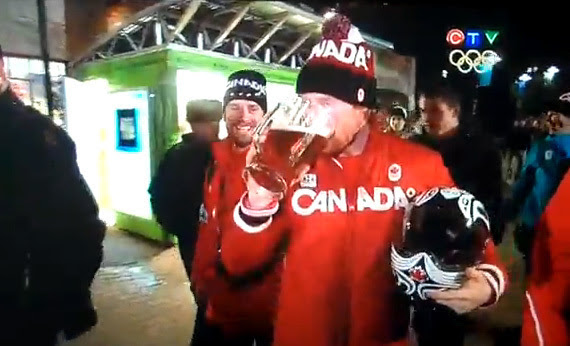 He even drank from it, on camera!
And then the IOC was supposedly scandalized by the Canadian women drinking beer and smoking cigars after their gold medal win:

But they weren't, actually. The only people screaming OMG! was the American media. As for the rest of us, Christie Blatchford said it best:

Nothing celebrates that spirit better, or more spits in the face of Big Brother, than a cigar enjoyed on the ice.