Just a short one tonight.
First, about the POEC hearings:

A lot of people are looking really really bad in this inquiry and none of them are named Trudeau.

And some of what we are hearing is just BS:

You mean the OPP that was MIA during the occupation? That OPP?

CSIS, on the other hand, says this:

Example of misleading headline but then read the actual article. :p

I know what was happening to people in Ottawa during the FluTruxKlan occupation was terrible -- here is an excellent list of everything the FluTruxKlan put them through.
But I think it was the border blockades that really caused the most trouble for the country as a whole -- senseless, chaotic, jeopardizing the economy, shattering international relations.

This was obvious. It was also obvious when the feds began to suddenly and belatedly get engaged. The province was behind until the Windsor border blockade threatened the economy. https://t.co/Ra3Ag9LSqf

The border blockades ranged from 3 days at the Pacific Highway Crossing in Surrey BC, to 18 days at the Coutts, Alberta crossing, and included 6 days at the Ambassador Bridge in Windsor Ontario and 6 days at Emerson, Manitoba.
It was nuts, nonsensical -- even if Canada had been willing to let unvaccinated truckers into the country, the United States was not, so Canadian truckers would still have needed to get vaccinations before they could cross the border.  This made it impossible to negotiate an end to the blockades. No level of government - municipal, provincial, federal - could meet the FluTruxKlan demands because they didn't make any sense.
But nonsense never stopped the FluTruxKlan!
And it was the border blockades that really made this into an international story. 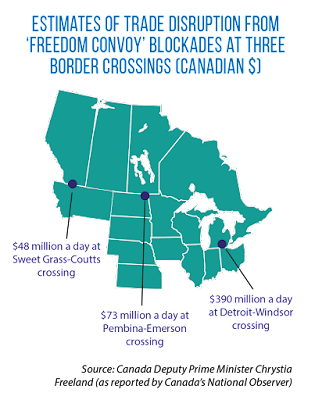 I was getting weary near the end of Mr Morris' testimony, but I thought he did refer to the entirety of convoy blockades & protests across Cda as being national security threats.

And last March, the OPPIB did say there were threats to national security.https://t.co/3VO1TOP29Q

Here is the OPP report from the next day, Feb. 8, which states the situation was a potential threat to sovereignty and national security. pic.twitter.com/UuleS48lu8

For those who are calling Doug Ford a "Liberal" for backing away from the Convoy just stop.

Ford has spent the entire Pandemic switching back & forth between kicking sand at @JustinTrudeau when it's convenient & riding his coattails to exploit JT's popularity. 😒 #CdnPoli

Doug's decision to skip boarding the crazy train was the key to his re-election. The CPc ought to have paid attention.

I almost feel sorry for the media. They are having a very hard time trying to lay the blame on Trudeau during the Inquiry into the Emergency Act. It’s so obvious that the Conservatives- Federal and Provincial- were supporting the convoy. #CdnMediaFailed

Next, about the nutty events in Britain:

As John Gray said in the 18th century, it had become unsafe to walk the streets of London for fear of being kidnapped & forced to serve in the cabinet.

Brexit was a package of (Putin-backed) lies, impossible promises, and cynicism wrapped in fancy paper. Liz Truss is an incompetent mess, but she is also the person left holding the package. The Tories are to blame and don’t forget it.

And some amazing comparisons between the British and Canadian politicians:

Liz Truss is the libertarian who’s stubborn adherence to her radical beliefs crashed the British economy. Danielle Smith is Alberta’s Liz Truss. Here’s the best definition of “libertarian” that I’ve ever seen. It’s very dangerous to hand libertarians the reins of power. pic.twitter.com/9CohEWRaOz

Pierre Poilievre wants a Liz Truss plan for the Canadian economy…and we can all see how that’s working out.

In commenting on the 🇬🇧UK’s Truss disaster, Mr. Coyne in yesterday’s ⁦@globeandmail⁩ put his finger rather nicely on the fallacies inherent in all contemporary populism.
Admirers of #BitCoinBoy, take note.
⁦@PierrePoilievre⁩ ⁦@CPC_HQ⁩ #cdnpoli pic.twitter.com/Swc3aOXcT3

Finally, about recent events in the Ukraine Russia War:

Putin’s decree “declaring” martial law in parts of Ukraine was another example of dictatorial sleight of hand, introducing more repressive measures across the whole of Russia. https://t.co/KQx8KCLDqM

President Biden says Putin's martial law in Russian-controlled Ukraine regions is his only tool "to intimidate them into capitulating," but that the crackdown won't break Ukrainians https://t.co/qiZY3cNmED pic.twitter.com/g30YToIIby

You can see why that's not a very promising starting point for negotiations.

Posted by Cathie from Canada at Thursday, October 20, 2022