Christ, what an asshole! 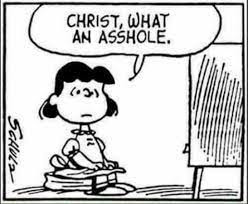 Back in 2006, blogger Charles Lavoie did a post to assert that all New Yorker cartoons would still be just as funny with the caption "Christ, what an asshole" and everyone was surprised about how well that works. It works with most cartoons and it became a meme.
So I was reminded of this again today when I saw these posts on Twitter -- they could all just be summed up with the phrase "Christ, what an asshole!"
First up -- Putin, of course!

.@McFaul | "Putin attacked Ukrainian civilians. He used incredibly sophisticated weapons to bomb playgrounds. There are no security objectives for Russia here. It's all about his personal ambitions." https://t.co/9Fgp1ouH90

She's a fascist, genocide denying liar. Were there special schools that unvaxxinated kids were sent to in far away places where they were abused by the Church?#abpoli

Um, I have questions. So many questions. What's with chamber lunches in North Battleford? Why are govt announcements done at a chamber lunch, anyway? And why is CAPP involved - 30 of their 48 member corps are fully or partially foreign owned.

It’s bad analysis. For context, this is saying federal climate policies will shrink the SK economy by nearly 10%! Not credible. Lots of issues with the assumptions used, such as presuming the carbon tax revenues are lit on fire rather than rebated (that’s 25b right there).

I just hope Danielle Smith and Scott Moe can agree to talk on alternate days. The country can only absorb so much stupidity daily. Let’s pace ourselves Canada. #cdnpoli #abpoli #skpoli

I was an IR major in college and one of my professors, with A LOT of actual foreign service experience, said that at some point someone will eventually push their luck all the way to FTG status.

FTG stood for Fuck Those Guys.

I think that’s where we are now.

Calculus for Musk, businessman apparently without a soul, is simple:
1. Secure cheap Lithium from Donbass. As Putin already "annexed" the region, Musk is betting on Putin rather than Ukraine.
2. Bend his knee to China so his Shanghai Tesla factory doesn't get shut down.
3. Profit

.@elonmusk denies @ianbremmer’s reporting that Musk told Bremmer he talked to Putin before he tweeted out Russian-like bullet points on Ukraine. Bremmer is sticking to his story. One of them is lying. pic.twitter.com/zdBXTuz4Fm

I know which one my money is on!

2/ to lend? Yes it sounds conspiratorial but does anyone realize how weird it is that he’s suddenly tweeting about Taiwan needing to become a SAR under 1c2s? What? Did he know before a week ago when Russia conquered Crimea?

Nova Scotia RCMP are in the news again:

This guy thought he could just run a bank out of his house -- what could go wrong?

And Toast the Cat:

The greatest academic acknowledgement I've seen in a while pic.twitter.com/BpxQGKCIbT

Posted by Cathie from Canada at Wednesday, October 12, 2022

Suvidha education said...
This comment has been removed by a blog administrator.
5:39 am