Today's News: What a week!

Beginning with a wonderful palate cleanser:

This is believed to be the first time in history that the Cup has entered a mosque. @HkyNightPunjabi @NHL @Sportsnet pic.twitter.com/wRIZAm8hvv

A short stop at today's Globe and Mail:

"Bell, what is your plan?...What will you do not just for Lisa but for us all." I joined many others in signing this open letter in @globeandmail to Bell Canada about @BellMediaPR's "business decision" to fire Lisa LaFlamme in prime of her career. Have a read & RT if you support. pic.twitter.com/RlrW0JoBAr

At this point, Bell Media will have to offer LaFlamme the National News vice-presidency before this controversy will be quelled. And I would be fine with that.
Moving to today's news, first here is a great cartoon illustrating the trolls Canada is dealing with these days: 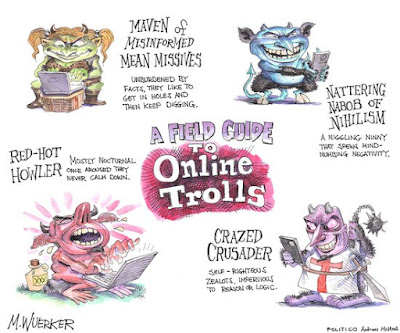 Which one of these characters would be that guy from Grande Prairie who cursed at Chrystia Freeland yesterday as she was getting into an elevator?
The portion of the video after he had been kicked out of the hotel shows he was just so very pleased with himself, so absolutely delighted to "own the libs".  Everyone is pointing and laughing at him now, but we're also acknowledging that this kind of behaviour is unhinged and possibly dangerous:

This appears to have been in Grand Prairie, where Freeland had events scheduled today. Comments on TikTok are overwhelmingly supportive of this guy. (The OP’s feed is full of expected anti-mandate and conspiracy posts.)

The Director’s Cut is worse of course. Rage Farmers have taken over the Conservative Party, and they’re about to put their man in charge. https://t.co/ycQ17OPCiQ

Canadian politicians from all parties are also speaking out against this - even Conservatives, albeit with a little nudging:

Are there any vertebrate conservatives remaining in Canada? Any of you going to stand up to this madness?

To @PierrePoilievre: Polite suggestion for your next video. Instead of talking to genuine wood or an imaginary PM, how about talking to the biggest asshole in Canada 🇨🇦 the guy in Grande Prairie who confronted @cafreeland How about giving him a piece of Jenni Byrne’s mind?

Deputy Prime Minister @cafreeland is a proud Albertan and a dedicated public servant. I have seen her commitment to our province and our country firsthand. The harassment and intimidation she has faced is completely unacceptable, and is in no way representative of Albertans.

There can be no liberty without order. Political leaders of all stripes must denounce this type of unacceptable conduct. 2/2

This is gross intimidation. People are angry. I get it. But this is dangerous behaviour. It cannot be normalized. Every political leader must speak out and condemn this. #cdnpoli https://t.co/azcuUE4vst

The verbal harassment and threats directed at Minister @cafreeland during her visit to Alberta yesterday were reprehensible.

If you disagree with a politician, by all means exercise your right to protest. But screaming threatening language & physical intimidation cross the line.

My friend Deputy Prime Minister and Minister of Finance @cafreeland didn’t deserve this. No one in public office does. This needs to stop. Canada is better than this.

Pierre Poilievre’s deafening silence on the Freeland event is probably the most honest thing he’s done.

The diminishing cohort of principled conservatives are struggling with core values and path to power. Not sanguine about how this turns out

Canadians were shocked and angry, and thousands tweeted support for Freeland:

Chrystia Freeland is an absolutely brilliant woman with an astonishing list of accomplishments during her stellar career. Yet, some inbred, uneducated hillbilly thinks he has a right to stalk, harass, & call her misogynistic names because he has a dick. That's misogyny in action. pic.twitter.com/HmVc0n1yGr

Note. It’s pretty hard to intimidate a woman who defied the Russian secret police, who stood up to Putin and Trump, and who can run circles around most bullies, in high heels, no less. She greets him in an open friendly way, then strides coolly into that elevator when he goes off

Dear DPM @cafreeland, you showed absolute grace and class while you were verbally attacked by a #WhiteSupremacist who @PierrePoilievre panders too. As a First Nations woman, born in #Alberta you are more than welcomed anywhere in my peoples country. Much love and respect.🪶🙌🏽 pic.twitter.com/edYkjik6fm

Not sure who needs to hear this but Ricky from the Trailer Park Boys was presented as a caricature, not a role model.

The Sound of Silence "Hello darkness, my old friend
I've come to talk with you again"
Today that silence comes from every right wing Conservative who has not flatly condemned the verbal assault and threat to Chrystia Freeland in her home province of Alberta.

I was part of every single round of 2017-19 🇨🇦🇺🇸🇲🇽 negotiations & had many of my own meetings with the White House.

$16B in new auto investment in CANADA since the signing speaks for itself. It’s more than the previous 20 yrs combined.

Moving to the Trump Treason scandal, here are some more great cartoons: 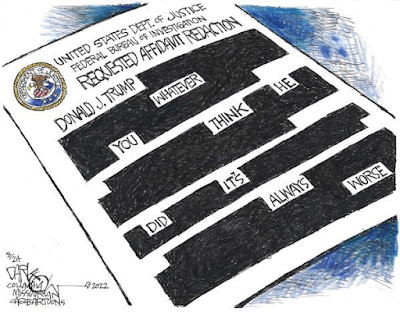 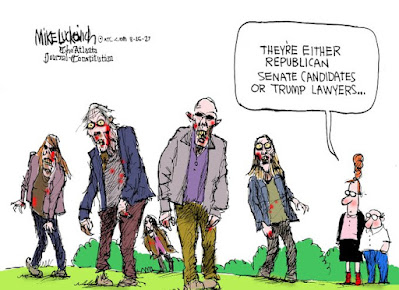 Shocked and appalled on Friday and Saturday, the United States is beginning to understand that Trump actually, really, seriously did betray them:

So, let me get this straight: In 2021 Trump stole documents containing the names of confidential informants? And then those CI’s ended up getting killed? — Now I really hate his guts.

Here is the unroll of an important thread by David Rothkopf:

Trump has always had a deeply troubling relationship with the US intelligence community. At his initial briefings as president, he was uninterested in key revelations and instead used the meeting to press officials for a public denunciation of the Steele dossier.
Days later, immediately after taking office, he gave a highly political speech at CIA headquarters that, in the view of former DNI Gen. James Clapper and many others, "desecrated" the memorial to former CIA employees.
He regularly discounted Intelligence Community views, particularly on the issue of Russian interference in the 2016 elections and the threat they posed to future election security.
He revealed classified information to Russian officials in the Oval Office. He released classified information via the Internet. He insisted people including his family be given security clearances when it was urged by professionals that not happen. He publicly threw the US IC under the bus during his Helsinki press conference after his mtg w/Putin.
He forced out senior intelligence officials who he felt were insufficiently loyal to him and replaced them with unqualified political hacks he felt he could manipulate and use to protect him from IC revelations that he saw as threatening.
He used the classification process to keep politically damaging information (like notes of the Ukraine blackmail phonemail) from the public view.
And as we now know, he stole and improperly handled massive number of highly classified documents. We still don't know how many. We still don't know why. We just know that doing what he did was not simply an act of ignoring the law, it directly put at risk US intelligence assets and US national security.
This is not a story about documents. It is a story about a man with years of proven contempt for our intelligence community and disregard for their well-being and that of the country violating the law in ways that could profoundly compromise our security and threaten the lives of individuals who were serving the US.
We have never seen such behavior from a senior US government official, much less a president. And we are only speaking of what we know.
Why was he so threatened by the intelligence community all along? Why did he feel they knew things about him that could be damaging? Was it just consciousness of guilt due to his active solicitation of the support of a foreign enemy during the 2016 election? Was it more than that? What is it we don't know? What did he seek classified that he should not have? What secrets went missing before this point?
What were the consequences of the apparently voracious appetite for secrets his son-in-law Jared Kushner had? Why was he so actively interested in them?
What were Trump's motives in taking secrets and obstructing the USG efforts to have them returned? What happened to the documents while they were in Trump's custody? Do we have all the documents back? Were there documents stored at places other than Mar-a-Lago?
What did he get his lackeys to do when they ran the IC? What were his plans for them were he to be reelected?
These are not "political" questions. These are questions that must be answered to understand what damage Trump and his inner circle may have done to our intelligence community, our intelligence assets worldwide, their safety and our security.
What we do is this: The same man who undertook this assault on US intelligence, led an attempted coup against the US government, attacked our allies, sought to gut NATO, sought to empower our enemies. This is not hyperbole, not speculation. This is the reality of the Trump presidency.
It must be seen for what it was and the man at the center of it must be seen for who he was and is--one of the greatest, most pernicious threats to US national security we have ever seen.

My take: Trump will probably be indicted for this.

Not placing any markers. But it’s gone from highly improbable to very plausible, approaching as likely as not. https://t.co/WGLkXGwrMz

I can't believe y'all voted a Russian asset into the White House simply because he was openly racist.

Correct me if I'm wrong, but Trump is now under investigation for tax fraud, election fraud, insurrection and violating the Espionage Act. And he's the Republican frontrunner for 2024

We have our share of problems up here, but... hoo boy pic.twitter.com/Ldj5rbWksf