Today's News: Blundered by the Right

When I looked at today's news, I saw a lot of blundering today by conservatives - thus my
title.
But first, I want to do a Ukraine roundup.
I thought this first tweet was very true and certainly something we all need to be aware of as
the Ukraine Russia War continues:

The minute we allow the war in Ukraine to become background noise we lose. We must have the nerve to continue to stare pain down the barrel and envelop it with love. Our compassion has power. Don’t look away.

The May 9 Victory Parade should prove an inflection point: does Vladimir Putin use the occasion to call for a mass mobilization to bolster the war effort, or will he keep pretending that it’s merely a “limited military operation” that remains splendidly on track, dooming the entire effort?
Ukraine’s regular army and Territorial Defense Forces have bought time for those 300,000 reservists out west to train and get equipped. A couple more months, and they’ll be riding into battle in Polish T-72s, American and European armored personnel carriers, and lots of sweet, sweet, modern artillery.
How will Russia respond, even as it attrits its existing forces on the daily?

Observers are increasingly concerned that the longer the Ukraine Russia War goes on, the more
difficult it will be to keep it contained. See this whole thread, but here's the beginning and
end of it:

2/ First is the superb Watling + Reynolds essay, which catalogues a disturbing shift in Russia "from presenting the war in Ukraine as a limited struggle for Donbas to a systemic struggle with NATO in which Ukraine was merely the military battlefield"https://t.co/PFfAFyxfiI

20/ But it can't be discounted. If it happens, demands for knee-jerk US action will come thick + fast. The balancing act at the core of US strategy--support Ukraine and punish RU enough to win + enforce norms, w/o courting a larger war--will become acute + perhaps unsustainable

But on the other hand, this:

A sign of a few things. 1) Ukrainian resistance and adaptability has impressed them no end. 2) they do think that Ukraine can ‘win’, 3) they seem to think that Russian escalation is not particularly likely.

I thought this was a very interesting piece today:

Watching families fleeing Ukraine, clinging to their children, Meeka Alivaktuk resolved to do what she could to help.

And ain't this the truth?

Can white people please start to educate yourselves about Indigenous people instead of allowing mistakes to be your “teaching tools?” We don’t need more apologies, we need people to catch up and bring equal knowledge to the table.

It was one of those days when every time you turn around, something else was happening.
And mainly, it was conservatives blundering into something stupid.

Case in point: Elon Musk
Its going to be embarrassing to watch him blunder around as he tries to come up with some sort of justification to allow Trump on Twitter again.
Musk seems to be far out of his depth when it comes to leading a social media company. He's
never given it any thought, he doesn't consult with anyone, he doesn't know what he's doing,
and he can't stop himself from saying something stupid.

Anyway, shocked to discover that Musk may be ill-prepared for what he's gotten himself into. 3/3

Musk's plan is to turn Twitter into another unusable right-wing dumpsite alongside Truth Social / Gettr / Parler / Gab. Normies will flee and the service will go into a death spiral, which is probably his overarching goal anyway. He's spending $44 billion to be a griefer. https://t.co/YqjeMTKBxw

Like any other CEO he can't tweet things that could move the stock price. Same rules even for him.

What’s going on: He’s trying to goad people into leaving and it’s an odious way of doing it. Speaking of which, you can be sure to keep up with the payments he needs to make, there will have to be significant layoffs at twitter. He’d rather they quit, than pay them out. https://t.co/QiRCt2MVmc

Next, a Covid update.
My husband and I got another booster last week, thank heavens and I am hoping our children will
soon be eligible. It's something that we're just going to have to get frequently, I think, because the
virus keeps evolving.
I am reading projections that human life expectancy will decline by up to 10 years because of the cumulative damage that Covid is causing in human societies around the world.
And credit where credit is due -- to all those anti-vaxxers and anti-maskers around the world who devoted heart and soul to trashing the science, stalling vaccination campaigns and ridiculing mask mandates - they gave Covid time to evolve into a world-wide endemic illness that we cannot treat effectively.
Maybe a year ago, humanity might have had a chance to vaccinate and mask our way out of Covid.
But not anymore. Now, Covid will be killing and maiming people for years to come.
Thanks, you blundering assholes:

Covid is the equivalent of EBV and HIV plus. It's more than neurodegenerative vascular disease. It infects T-cells and ages your immune system persisting in your gut & brain stem. https://t.co/ZED722rrSvhttps://t.co/HWC1kbBxbxhttps://t.co/TEJJJ9mpvDhttps://t.co/QQualSrdSm

Dr Fauci is right. The pandemic phase is over. The Gov't failed to contain the virus. It's now endemic. Everyone without a mask will get 1-3 infections every year. This will redefine every part of healthcare. Instead of being excited about it - we should be frightened.

Imagine an economy, a health care system, a world, dragged down by tens of millions more of people each year unable to resume their jobs, who need sustained long term care, who suffer profound life-altering disability. That's a MILD outcome of the current path. …

And COVID impacts appear to be cumulative - each time you catch it, more damage occurs. The damage is random, depending on where it concentrates in your body. It can be anywhere. In unvaccinated, there appears to be brain impact every time. In vaccinated, 30 - 50% of the time.

Next, its the biker convoy I am now calling "Rolling Blunder" -- they're scheduled to arrive in Ottawa two days from now, and it sounds like they will be greeted by eggs:

Well... this will not bode well for Ottawa Biker Protest, if kids get wind of this ! Lol... https://t.co/P7HxovuJXf

I think @PierrePoilievre should invite Rolling Thunder to @ManotickVillage for the weekend. Downtown Ottawa doesn't want them and we know Pierre would welcome them with open arms .Maybe it is time for the people in Carleton who actually vote for PP to experience this.

I see in Parliament, the Conservatives are frantically dredging up four-year-old smears against
Trudeau -- a pathetic attempt to distract Canada from the Emergencies Act review, before we
remember how ugly it was to watch the CPC pander to the FluTruxKlan.

Hey deplorables - you note how us Libs and Progressives aren't scared at all of the coming inquiry?

We have nothing to hide.

You lot sound like you really don't want to hear what this inquiry will find, do you? are you scared, bro?

Every month that passes, the question of what would happen to 🇨🇦 if the Conservative Party was in charge gets more dystopian.

In other news, it turns out that April 27 is everyone's birthday!

Happy Birthday, everyone!
On this day in 4977 BC, the universe was created. According to German astronomer Johannes Kepler.https://t.co/otDjut7GCv

And the planets are aligning today, too -
Earth, with Mars, Venus, Saturn and Jupiter: 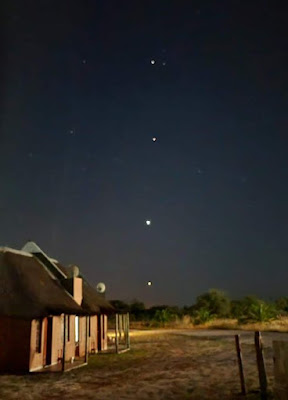 thanks for keeping this blog going!