Today's News: Just a smile and a cup of coffee 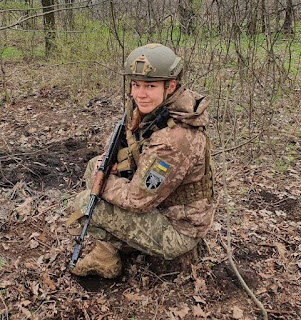 What a great smile! Olena is an officer in Ukraine's 128th Mountain Assault Brigade – the Transcarpathian Legion. Photo is from this tweet.
There's a tweeter in Kyiv, Yaroslava Antipina, who posts every morning as she sips her coffee, and she calls this #warcoffee. She is now joined by dozens of people in countries around the world:

Calm night & morning in the city.
Today in plans work & small preparations for our journey to relatives for Easter 🌞

Ready to have #warcoffee. Would you like to join with your cups? pic.twitter.com/YP9xFwbiAw

NEW: Ukraine is warning the White House that Putin is going to use May 9th - “Victory Day” over Germany to end WWII - to escalate the war

But the US believes it is more likely that Putin will instead claim some sort of dubious victory - and keep fighting https://t.co/uoOFeiRsCX

Our unity at home and our unity with allies, partners, and the Ukrainian people is sending an unmistakable message to Putin: He will never succeed in dominating and occupying all of Ukraine. That will not happen.

And I see Russia has given up on defeating Mariupol:

Regardless of how Putin frames it, Mariupol has actually defeated him.
The Battle of Donbas isn't going very well for Russia either:

It is against this dropback of giant Putin failures that we must understand the Battle for Donbas. That the Kremlin has now explicitly changed the focus of their war to be "defense of Donbas" signals a major defeat in the overall war. 9/

Something seems to be wrong with the Russians bloody military/technology buildings today.https://t.co/wRnDmsDfu5https://t.co/8cr0njE2xb