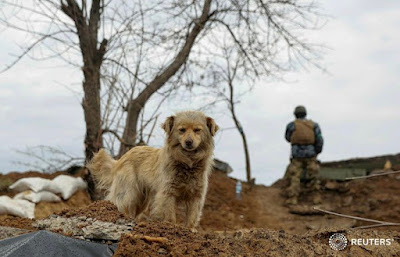 Here is a post that collects some of the great tweets and photos I have found that highlight the dogs of Ukraine:

Remember Patron 🐾 the little hero bomb detection dog in Chernihiv #Ukraine? He’s adored by his military family & gets lots of down time after working to protect lives... he’s sniffed out 150+ IEDs SO FAR ❤️🇺🇦 *Follow him on #Instagram (patron_dsns)* Photo:patron_dsns pic.twitter.com/eX0oCJnnVr

#Ukrposhta announced the release of a new stamp - it will depict the #Ukrainian dog #Patron, the Jack Russell Terrier bomb-sniffing dog and mascot of the State Emergency Service of #Ukraine who is now helping rescuers clear mines in #Kyiv

This dog us a superstar 🐶🤩 pic.twitter.com/fd93du2Bjv

Maria Fomenscova shows a journalist how she covered her dog's ears with her scarf so he wouldn't be frightened when the shelling hit her town of Horenka, Ukraine. That's called love. Photo: Oleg Pereverzev. pic.twitter.com/TjWWTFQjX7

This #Ukrainian lady somehow survived the indiscriminate bombing of #irpin and she will not leave (she takes care of the local strays). She was overwhelmed when supplies arrived. It was such an emotional moment to meet her. There is so much to do here 😔 #nowzadukraine pic.twitter.com/tXjrKVN83L

A dog waits in front of an operating room while medical team performs surgery on a Ukrainian soldier in a hospital, amid Russia's invasion, in Kramatorsk, Donetsk region, Ukraine, April 19, 2022. REUTERS/Marko Djurica pic.twitter.com/w99TKbkDcI

After the liberation of the village and elimination of the #Russian unit, the Belgian Shepherd was sheltered by local residents who gave the dog to the #Ukrainian military 💪

From now on, Max will serve on the right side, defend #Ukraine and gnaw Russian asses.

I want to share some good news out of Ukraine tonight. While @WCKitchen was delivering food in Derhachi north of Kharkiv, Cary Fukunaga spotted a dog stuck on the second floor of a blown out building. He was able to get him out & Cary now has a new family member 🐶 #DogsOfUkraine pic.twitter.com/u9UWZDnpKS

A child holds a dog as evacuees wait before boarding a bus to leave the city during Ukraine-Russia conflict in the southern port of Mariupol, Ukraine April 20, 2022. REUTERS/Alexander Ermochenko pic.twitter.com/krsdde6Zcv

I don't know where this photo is from or who took it, but isn't it great? 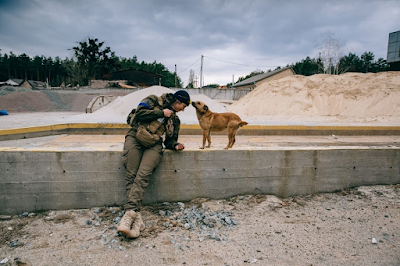 And here's an amazing photo from Daniek Berenhulak New York Times, of a stray dog with a soldier at Irpin: 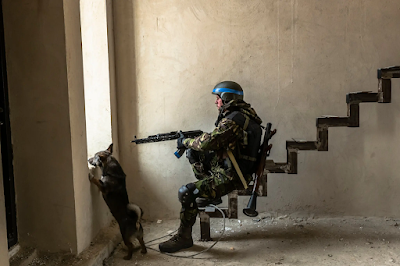 Goodnight #Ukraine. Stay safe one and all. pic.twitter.com/pYm0JifZ5T

🐾This purrfect hooman crosses the border from Ukraine to Poland. She was carrying her two kitties, the pup leading the way. Our hearts are irreparably broken and bruised from seeing the hurt and suffering inflicted on the Ukrainian 🇺🇦 people & pets. 📸 : Aleksandra Szmigiel pic.twitter.com/xIUR7nYWUa

🐾♥️ Thank you, courageous Ukrainian kitties! Champ has passed away, Major is now living in Delaware with family friends. It’s me Commander as First Dog now & Willow as First Cat. Also Poppet, First Rabbit. The @DubiousPod pawdcast explained all of it. We love you, sweet 🐈🐈‍⬛🇺🇦 pic.twitter.com/ngaKKHKVHy

Finally, one more cat -- they do creep in, don't they?

A woman with her cat arrive at a train station in Poland after escaping the Russian attack of Ukraine. That's exactly what I looked like as a kitten. Photo: @Reuters pic.twitter.com/ZM6DA8sPke

In other news, this was a great sight today - Ukrainians are cleaning up their war damage as fast as they can: