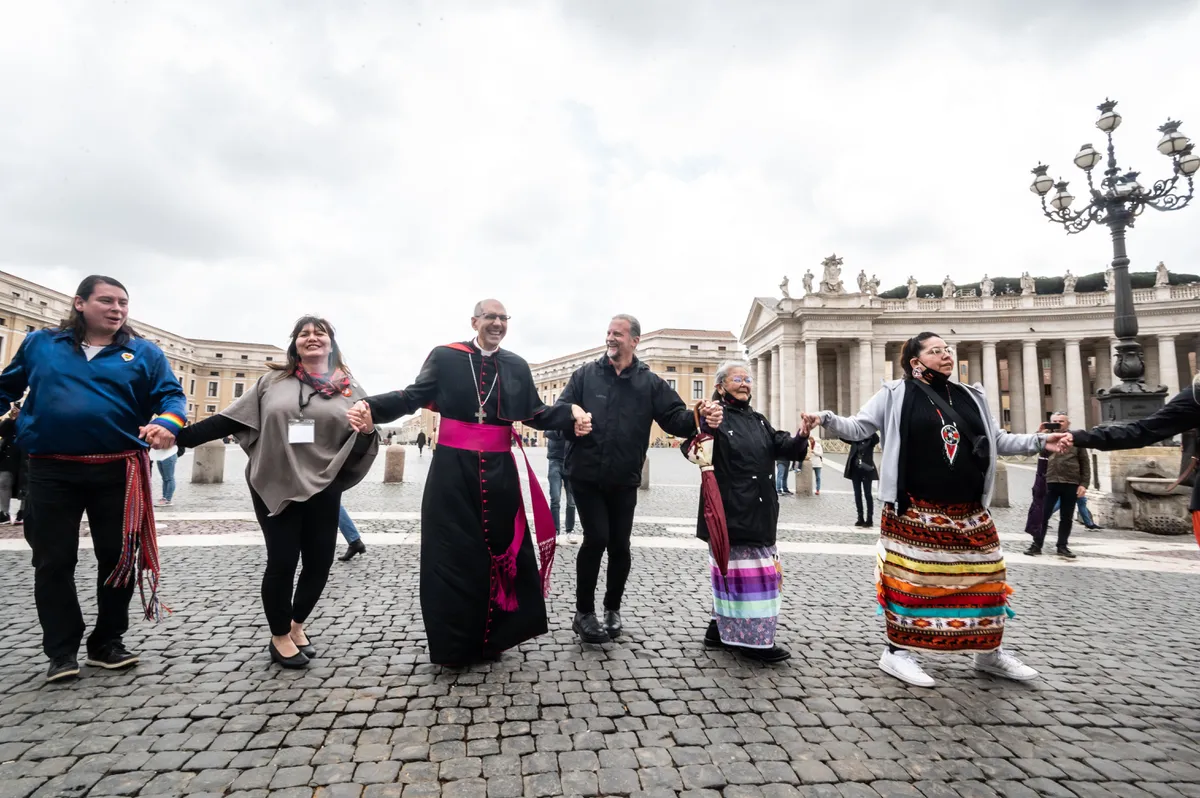 After the world bore witness to the unmarked graves of Indigenous children in the thousands last year & ongoing searches, the time has come 2 an doorway 2 healing. Finally the Catholic Church admitted it’s wrongs. Forgiveness couldn’t even begin without it. A new day is dawning.

In Rome, Pope Francis apologized this morning for the tragic history of residential schools -- the Canadian delegation including Saskatchewan archbishop Donald Bolen were able to smile together as they danced the round dance in St. Peter's Square. (AFP Getty photo)

Thank you, @Pontifex. It has caused terrible harm and damage. I hope that this is a chance for healing to begin. It is for me personally, having left the church on hearing of those terrible abuses, a chance perhaps to again find solace in the community of my childhood.

Here is the full text of Pope Francis’s apology for residential school. Catholic Church’s role in colonial institutions fills me with ‘indignation and shame,’ @Pontifex says in historic speech at the Vatican https://t.co/TpwL1gaezQ via @globeandmail #Indigenous #reconciliation

Dr Wilton Littlechild, who has advocated for years 4 the Catholic Church to apologize; was a TRC Commissioner, he’s a survivor of residential schools and now uses a walker-it’s his 78th bday today. He danced in St Peters Square celebrating @Pontifex apology which is momentous pic.twitter.com/8al4YDELAU

Celebrating in St Peters Square with round dancing- locals join in. Lots of smiles, Chief Willie Littlechild is beaming. pic.twitter.com/23Sh6kLmzO

Pope Francis’ apology for the Roman Catholic Church’s role in operating residential schools in Canada would not have happened without the advocacy of Survivors. To those who shared their truths, and relived their painful memories with bravery and determination: Thank you.

The meetings in Rome this week between Indigenous leaders and the Vatican are historic. The Doctrine of Discovery, Residential Schools reflect a colonial past whose terrible impact must be understood as we seek to overcome it. #UNDRIP

The Doctrine of Discovery is described here - basically it is the doctrine invented 500 years ago that allowed European Christian monarchs to claim ownership of non-European lands.

So the Pope has apologized for his Church’s part in the damage done to Indigenous children in Canada’s coercive residential schools. How about he follows this repentance by rescinding the papal bull inventing the even more damaging Doctrine of Discovery? https://t.co/5gmWLM4IZ5

The Truth And Reconciliation reports are all posted here
In other news today, the Russia Ukraine War continues -- here is a map showing what is happening:

Map of territories that Ukraine has retaken during its counter-offensive.

The West needs to send Ukraine more weapons so they can keep up their momentum. pic.twitter.com/K98ZDRytbh

Find out more about the UK government's response: https://t.co/RkaaqnwGCV

As Russia is forced back, some dreadful events are being revealed - videos and photos today show the bodies of civilians and Russian soldiers lying on the streets, ruined buildings, houses destroyed, dogs scavenging:

Pure horror: Putin’s invaders are retreating from Kyiv Oblast and leaving ruined towns and villages in their wake with streets full of dead bodies https://t.co/QhOrrioLdY

The fact that they leave the bodies of their comrades behind tells you a lot about the Russian military https://t.co/p4jGN3nhw2

Or: they had a strategy, it was just a disastrous one. https://t.co/jdW859aA9I

Note the Russian Army is using a civilian dump truck to transport supplies.

This is something to watch for going forward. https://t.co/5hU2azvkz6

My professional assessment is that this is an actual part of Putin’s strategy. Specifically, to cause a crippling rise in the price of grain and food prices leading to wider spread instability and famine. By doing so Putin increases the pressure on the US and our allies to pressure Ukraine to negotiate an end to the war before the Ukrainians have achieved a successful battlefield termination.

In the past year we've had people reject vaccines in favour of horse dewormer, a billionaire fly to space in a penis rocket, and a bunch of folks think you can overthrow the government by honking your horns a lot. I just don't see how April Fools can compete.

This was the most savage April fools joke. https://t.co/PnkbGgG4s5