Corruption of the Soul 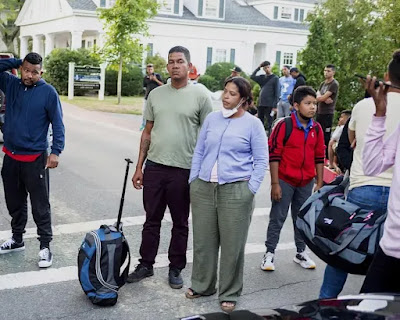 Two very different stories this week, from different countries, and yet there is a connection at their core. Both the DeSantis' Martha's Vineyard stunt and the Poilievre press conference freak-out demonstrate, I believe, the kind of corruption going on in our politics today.
It doesn't follow the usual definition of political corruption - when someone is lusting after public money.
It is something different -- the kind of corruption where political power itself is the object of lust.
Basically, it's the power to tell people to Fuck Off -  or even, Fuck Off And Die - without a second thought -- just because someone thinks the exalted position to which they aspire will give them that kind of power.
Its the ultimate Karen moment, the I Demand To Speak To The Manager outrage, the Do You Know Who I Am? riposte.
In Steve Schmidt's substack today about the Martha's Vineyard immigrant stunt, he describes Ron DeSantis like this:

...The images of decent people coming to the aid of people who are scared, lost, confused and stigmatized will present the backdrop for the November choice ahead. This is the choice: decency or cruelty. Freedom or control. Democracy or MAGA.
... Here is what matters: this is the audition. What does [DeSantis] want? He wants to be the American head of state. He wants to feel what it’s like to be the commander-in-chief of the most potent and deadly military in the history of humanity.
This is how he thinks he gets there. He is talking to the small group of extremist donors, pundits, academics, and militia thugs who he believes control the Republican nominating process.
DeSantis knows these people don’t want to talk about American unity. He knows they reject the notion of “E Pluribus Unum.” They aren’t interested in building or making things better. They want to punish, dominate and control half the country.
DeSantis is laying his cards on the table. He is making an offering. He is trying to say, “I will hurt the people you hate”. What he is saying is, “Give me power, and anything is possible.”
It has become difficult for MAGA politicians to distinguish themselves given the magnitude and severity of their movement’s disgrace, sedition and cruelty. Yet, DeSantis has managed to do it here.
The Florida Governor is unfit, both morally and ethically.
...What does it mean when the practice of cruelty is put front and center, and the unfitness to lead in a pluralistic society becomes the elemental qualification for the nomination of one of the two major parties in America?
It means we have arrived at an hour of national crisis that demands an end to an era defined by a lack of imagination.
Did you see those stunned and confused people this week? If it can happen to them, then it means Ron DeSantis can wish it for you.
Achieving that wish doesn’t require any more malice on his part. It just requires more power.
He would love to live in a world where he can do anything because he has power.
What do I think he would do with it? I think he would kill a lot of people, and I think that people who don’t see that are very naive.
Why do I believe that? Look at the faces of the lost and sacred people in Martha’s Vineyard. That could be you.

asylees could not be traced. That is a little TOO CLOSE for comfort to what the Nazis did. I wouldn't be surprised if someone told the asylees that work would set them free! We are not that far from the unimaginable.

This is the kind of power that Trump really enjoyed using and abusing when he was President - he could tell the Joint Chiefs of Staff they were all cowardly assholes and they just had to sit there and take it because I Yam The President!
It's why Trump lusts to be president again.
Here in Canada, achieving this kind of power is also why Poilievre lusts to be Prime Minister - he wants people to quake in their boots when he walks into a room.
Based on the remarks he made during his leadership campaign, he seems to lust to fire civil servants, to "de-fund" the CBC, to order around the Bank of Canada. And the people to whom these orders are issued would just grovel and cringe and bend the knee as they bow their way out of Poilievre's office. He seems to thinks a Prime Minister should be able to issue any orders he wants to his members of Cabinet and then can send the boys in short pants, the flying monkeys, into the ministries to keep tabs on them, as Harper did.
So when Poilievre deigns to makes an announcement to the media, and they shout back at him as Akin did, then he flips out - scowling, sneering, insulting, lashing back. How dare they? Don't they know Who I Am?

Say what you will about David Akin but Pierre Poilievre sure showed his true colours during that encounter: Petty, insecure and narcissistic.

It is a profound self-indulgence.
Yes, paranoid populism is a worldwide phenomena -- in yesterday's Globe and Mail, Justin Ling provided a summary of "paranoid populism" around the world while recognizing the danger that Poilievre poses for Canada. But then Ling quickly takes refuge in a comforting belief that Poilievre isn't really as nutty as these other guys:

A huge swell in real-world violence, harassment, intimidation and death threats against health care workers, journalists and politicians have shown how fervently these people believe in their cause. Indeed, anti-government fervour informed a plan to kill the Prime Minister in 2020 and an alleged plot to murder police officers during the blockade in Coutts, Alta.
Whether it is out of genuine concern or a post-facto justification, Mr. Poilievre’s camp believes that the Conservatives can moderate this small but vocal minority, even if extremists walk among them. But even if they don’t, they figure, beating Mr. Trudeau would vindicate the risk.

Yeah sure -- all those other countries couldn't deal with paranoid populists, but our Canadian guy can? Oh, dream on. I'm afraid Canadian media is already creating a Poilievre persona as a rational actor who can ride the whirlwind.
Message to the media: he can't.  Because he doesn't want to.
Posted by Cathie from Canada at Saturday, September 17, 2022