Today's News: It's going to be a marathon, not a sprint 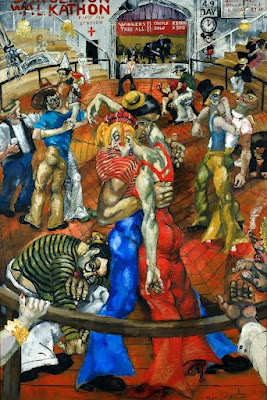 This marathon will be exhausting.
Pierre Poilievre hasn't even been Conservative leader for two weeks yet. By the time the 2025 election finally arrives, we're all going to be as shell-shocked and tired as those marathon dancers in Evergood's 1935 painting.
So here's what happened this week.
On Monday we heard all about how Trudeau had been caught singing when he was in London for the funeral.  Of course, the Conservatives were shocked -- SHOCKED - to find that singing had been going on.
They talked about it all day Tuesday, and then on Wednesday this happened:

In Question Period yesterday, I tried to explain it in a way that Justin Trudeau would understand. We have Inflation Landslides and No Escape from Poverty. He’s not a poor boy, but he should have some sympathy! #cdnpoli #shpk #fortsask pic.twitter.com/x7gp6bo3iq

Alberta Conservative MP Garnett Genius was trying to parody Bohemian Rapsody lyrics while he raked the Liberals over the coals, because that's the music Trudeau was singing in London.
And all we can conclude about Genius's skill as a lyricist is, don't quit your day job.
Even Michelle Rempel-Garner was not impressed:

Something is up with Michelle Rempel-Garner.

She's rolling her eyes while a CPC MP speaks. And then she's the only CPC MP refusing to clap for him. pic.twitter.com/4ZrKVOcfVs

Genuis tries to includes lyrics from “Bohemian Rhapsody” in his question, and I cannot adequately tell you how lame it is.
When horses are this lame, you shoot them. #QP

Now, you young whippersnappers won't remember, but there was an incredible Sydney Pollack movie from 1969 starring Jane Fonda about a dance marathon titled "They Shoot Horses, Don't They?" and  this phrase became part of our culture.
So this may have been the reference alluded to in the tweet.
But when the Conservatives saw it -- bring out more fainting couches and begin the pearl clutching!
The tweet itself wasn't ratioed, but suddenly Smith found himself accused of issuing threats to an MP and the monkeys began to fly:

Dale, you are using a violent metaphor invoking an image of shooting someone you disagree with. You are a member of the parliamentary press gallery. If a Conservative MP did something like this, you would be the first to demand their resignation. You are a complete hypocrite. https://t.co/NpxIz2bQGw

Pierre P finally expresses some outrage. There is none when F*ck Trudeau flags fly, when nooses are paraded with Trudeau's name on them, when Swastikas are scrawled on our Flag, when the PM's life is threatened. Methinks Poilievre is disgusting.

The Press Gallery produced a mealy-mouthed statement that sort-of supported Smith, but with a tone of "oh darn now we have to defend a journalist AGAIN!" -- because remember the Akin affair was just last week:

Some journalists were not impressed with the press gallery statement:

Good Christ, what? The press gallery said WHAT? What an utterly craven bit of underbusthrowing. https://t.co/WBn8AXe4AY

I said the question was lame, not the MP.

Others appeared to think the statement was "well-worded" - harumph! harumph!

🙄🙄🙄 It was an analogy, not a threat, or "violent rhetoric", against anyone. Gimme a break.

Good grief. When the Conservative MPs are still harping on this nonsense a week from now, better remind the PPG journalists to skip the "beating a dead horse" tweets.

He didn’t threaten you, you preposterous fraud. https://t.co/w9iC3f5oto

And speaking of mealy-mouthed, here's Genius' response to Coyne:

If only he had just held up a noose with your name on it then Pierre Poilievre would call him a hero and bring him coffee and donuts like he did for the convoy assholes. This hypocrisy stinks.

Of course, there actually are some larger issues going on:

Ballingale is Canada’s Bannon. And to quote Steve Bannon:

“The real opposition is the media. And the way to deal with them is to flood the zone with shit.”

Polievre and Ballingale are trying the same playbook.

Today, Smith talked about the rage-farming problem in his Routine Proceedings newsletter:

...The point here is that this is how the intimidation game is played, and why they think that journalists are uniquely vulnerable.
If you are critical about anyone on their team, they declare that you are biased, even though you are critical about every team.
They howl and moan, in the hopes that you either apologise and retract, and then they know that you’re weak, and that they can silence you through these kinds of tactics.
It’s partially why so many journalists have resorted to scrupulously both-sidesing all of their lies—because they screamed and moaned about being treated unfairly, and insisting that they were “insulted” when they were called out for their blatant falsehoods, and yes, this has absolutely happened—until those reporters and their editors stop calling them out, and instead, just both-sides what is said.
Both-sidesing in turn allows them to lie with impunity, because they know they won’t be called out for it, lest they begin this cycle again.
And now, our political discourse is completely fucked as a result.
So no, I’m not going to let Scheer or Ballingall intimidate me, and their winged monkeys don’t scare me.

Now Genius has asked for the Speaker to revoke Smith's press gallery credentials and Smith told CBC he will be refraining from further comments himself until that ruling has been made.
And whatever results, regardless of whether Smith ultimately apologizes or not, the whole contretemps will have a chilling effect on the press gallery.
And Poilievre hasn't even been leader for two weeks!
Posted by Cathie from Canada at Friday, September 23, 2022