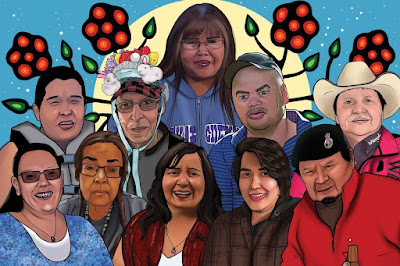 Beautiful illustration from The Globe and Mail, by Chippewa/Potawatomi artist Chief Lady Bird 🦅 ᐅᑮᒪᑫᐧᐱᓀᐢ
Inquests were just announced into the massacre of Sept. 4:

Is being done since there will be no criminal trial and the public and families deserve to have their questions answered in a public hearing of facts.

“It’s still real. It’s still terrifying. It’s still hard,” Stonestand said.
“A lot of hurt you can feel in this community. A lot of it. Wherever you go. And people have no trust, but they’re trying to come out.”
Residents attend cultural events, sweat ceremonies and feasts wearing “James Smith Strong” T-shirts. The sacred fire that serves as a spiritual doorway for the dead still dances.
.... While the community looks to shed the darkness that hovered over it on Sept. 4 and restore order with traditional ceremonies and plates full of bannock, they still await answers.
Moostoos said the First Nation has requested a timeline of the stabbings from RCMP, without the gory details, to help them heal.
He said there’s no use speculating what happened or why, as it only leads to more rumours.
“Right now we’re knocked down,” Moostoos said. “But we will get back up and we’ll get back up with pride when our community comes together.”

This Phil Tank Star-Phoenix column from last week talks about the questions that remain and whether an Indigenous police force would have made a difference:

Would an Indigenous police service have prevented the Sept. 4 tragedy that rocked the nation and shocked the world? There’s no way to say.
But it seems possible that a more robust Indigenous policing presence may well have been able to locate mass murder suspect Myles Sanderson, a serial violent offender who was deemed “unlawfully at large” in May, prior to the murder spree.
Given Indigenous people’s historic mistrust of the RCMP — with many good reasons, some as recent as the police force’s actions after the 2016 shooting death of Colten Boushie — this seems a logical step.

Some other recent tweets and news stories about James Smith Cree Nation:

“Why did this happen? What is the meaning?” The James Smith Cree Nation indigenous community is grappling with one of the worst mass killings in Canadian history. Beautiful, sensitive imagery by Kitra Cahana for @wsjphotos. https://t.co/RHqb5RL38P

It was an honor to spend the day at James Smith Cree Nation and speak to such resilient people https://t.co/wdIeAuJb5Y

this is me at treaty 4 Saturday night Live my auntie took a video of me dancing in Grand entry at treaty 4 powwow I was so glad to dance to heal to pay my tribute to James Smith Cree Nation and to dance for our people of all treatys in turtle Island pic.twitter.com/nCWgDRiL97

WATCH: Global's @teaganrasche joined our @KFowlerTV live on location this morning, two weeks on from the horrific stabbings on James Smith Cree Nation, to share details on how people are coming together to support the community. pic.twitter.com/7jRG4dv5uI

Saskatchewan stabbings: James Smith Cree Nation finds solace in grief as they bury their dead | https://t.co/ZL8dQFprEn https://t.co/7hoPGFBvbK
“We never wished for this to happen. But I hope it’s a wake-up call.”
誰のための wake-up call かと、ずっと頭に残ってる。

This evening James Smith Cree Nation Chief Wally Burns is headed to Toronto for upcoming meetings with ministers. He says the discussions will include the generations of trauma First Nations in Saskatchewan continue to face. https://t.co/VzC4DbRRjF #cdnpoli #sk

Burns has been the chief for James Smith Cree Nation for 18 years, and said it has about 4,000 members, 1,200 of whom are on reserve.https://t.co/w6bBjTvwmY

The Queen's last message was one of support to James Smith Cree Nation:

Thank you Queen Elizabethll for your words of condolences for the victims and families of the James Smith Cree Nation in my province of Saskatchewan. #QueenElizabethIIMemorial pic.twitter.com/9yqLV0BKiu

Posted by Cathie from Canada at Wednesday, September 21, 2022