Today, here's some of the interesting stuff I bookmarked recently: 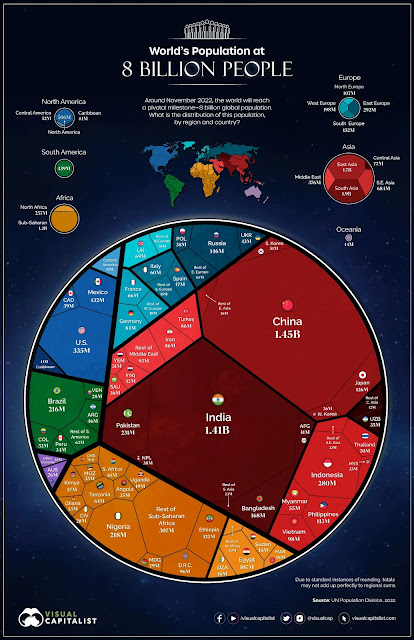 This is fascinating - its a visual representation of the world population and the webpage also has much more detail about specific continents.

In 1953 EC comics published a story called 'Judgement Day' with a black astronaut. Prejudice had been eliminated in that future.
America lost its damn mind.
[Except Ray Bradbury, who wrote in to congratulate EC comics AND said the story should be required reading for everybody] pic.twitter.com/GgkIWR2xzw

This is neat. I love the look of shock on the guy’s face. https://t.co/fBmxbUMK68

such a clever dog pic.twitter.com/oHnIEGhXrm

This is the best sound in the world pic.twitter.com/ODzKwHQYvE

Funny comments on the passing scene:

can't believe they made mussolini a woman in the reboot. this woke nonsense has ruined yet another franchise

I think Puffins are the most perfectly-named beings in the entire world.

When Pete Buttigieg comes for someone, he doesn’t carry a sledgehammer…he wields a scalpel.

And in this must-see clip, Pete slices Ron DeSantis into a million little pieces. pic.twitter.com/FvmNpbL6yn

One of the greatest letters ever written.

🎶Guess who’s back in the House?🎶 pic.twitter.com/fHKe2IQCgo

Posted by Cathie from Canada at Wednesday, September 28, 2022

Thank you for contributing to your fantastic article with your important input. I'm glad I took the time to check this more.
Please go to my website: Buygenmeds
Allow yourself to be carried away by your passion. Cenforce 100 is a prescription-only medicine. Sildenafil Citrate is a medicine that is used to treat the condition, of impotence, and premature ejaculation in men.
Tadalista 20 (tadalafil citrate) is a medicine that is used orally as needed before sexual activity to restore the ability to generate erectile firmness in response to sexual stimulation that has been lost or damaged.

Excellent work and many thanks for providing this useful blog. Your content is so compelling that I never think to pause and comment on it. You're performing admirably. Keep going.