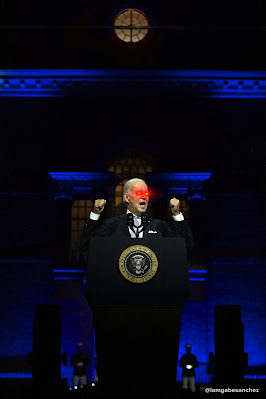 At first I wasn't sure whether Biden's speech tonight was a good idea. But seeing the speech and now the reaction to it, I am feeling a very positive vibe.
Since the chaos of Jan 6, 2021, I think Americans have worried about what is happening to America. With Biden's recent successes and rising popularity, he finally had the platform and credibility to identify the MAGA Republicans, to shame them as fascists, and to challenge Democrats to rise up in defense of their country.

"Democracy must be defended, and it is up to us." President Biden

I don't think the MAGA Republicans really knew much about Dark Brandon until tonight's speech.

Biden: "There is no question that the Republican Party today is dominated, driven by, and intimidated by Donald Trump and the MAGA Republicans, and that is a threat to this country ... MAGA Republicans do not respect the constitution. They do not believe in the rule of law." pic.twitter.com/Ox8PReq2zd

President Biden, closing out his speech in Philadelphia: "If we do our duty, in 2022 and beyond, then ages still to come will say, we — all of us here — we kept the faith, we preserved democracy." pic.twitter.com/9kxYLbGwDQ

There's a part of me debating whether Biden's speech wasn't tough *enough*. But it was necessary and right to give it.

President Biden is completely and absolutely fed up with the MAGA Republicans. As are we all. He’s tired of the Conspiracies. He’s disgusted by the calls for violence. And he’s not letting them get away with it anymore. This is the most patriotic, American speech of the decade.

A historic moment. A sitting US President accepting the burden of admonishing his predecessor's powerful cultural movement, doing so honestly and resolutely, and framing it as a threat to the country.

I am not sure whether America, and particularly the US media, are up to the challenge:

Biden calls on the nation to unify to protect our democracy... and MAGA world responds by calling him #PedoHitler. And somehow CNN will report this out as Biden being divisive.

I think certain types of Republicans got real comfortable with the idea of flaunting and openly ignoring voters while trying to subvert elections with no pushback, so Biden directly calling it out feels shocking to them.

the house is on fire and you’re complaining that the firefighters are stomping on the flower beds. PUT THE FUCKING FIRE OUT

Here's the problem for the elite political media: To cover the threat to the republic truthfully, they're going to have to write/broadcast things that have collateral benefits to the Democratic Party. No way around it. The point is not to worry about that.

Let's be completely honest here: the entire White House press corps knew who he was - all four years, hell from the escalator on down - and pretended he was a legitimate political figure. The failure is astounding. Not of skill - but of character and ethics.

Biden's speech is also timely because in general I think people have now had enough of the fascists and MAGA Republicans, and want to push back on the crazy:

Agree. Gloves off. Same here in TX. People who used to be afraid of putting up Beto or any Dem signs etc are now finally saying eff it we're fighting back!

There are the same worries here in Saskatchewan:

I know family’s that live in fear as neighbours are so radicalized. My mechanic bro said otherwise nice folks he used to share a few beer with, he has to be careful what he says, worried about his pets getting hurt as they’re casual about their hatred & brag about shit they do.

It shouldn’t be this way. It’s hard but we need to be braver. When people became aware of my “leftist” views others reached out.

Posted by Cathie from Canada at Friday, September 02, 2022

Email ThisBlogThis!Share to TwitterShare to FacebookShare to Pinterest
Labels: Biden