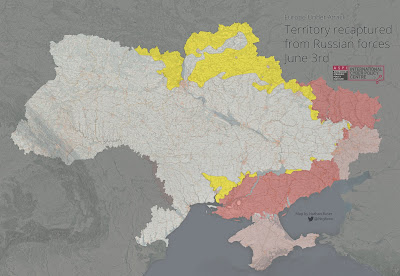 It has now been 100 days since Russia invaded Ukraine.
The yellow markings on this map from Australian Strategic Policy Institute researcher Nathan Ruser show how successful Ukraine has been in retaking its territory from the Russian invaders. Ruser notes that more than a thousand Ukrainian settlements have been saved from Russian occupation
And here is a fascinating video:

2/2 Above all, it was based on wildly optimistic assessments about the welcome Russian troops would receive in Ukraine. Russia has now adopted a “strategy of attrition” and is achieving slow and costly gains in the Donbas. #StandWithUkraine

But some pundits in the West are getting bored -- they seem to want this war to end so they can get back to planning holidays at the lake.
We're seeing articles now like this one in today's New York Magazine: The War in Ukraine Can Be Over If the U.S. Wants It -- written by a 32-year-old journalist Ross Barkan who has never done anything except write novels and cover New York politics. He describes a three month war as "dragging on" and says Kissinger and Chomsky are merely "facing reality" when they urge the West to give up on Ukraine.
Here's the reaction to this article from war correspondent Danny Gold, who knows Ukraine:

What will happen is more Ukrainians will die. Russia will take more territory. Ukrainians will fight a brutal and bloody insurgent campaign. Those under Russian occupation will be tortured, imprisoned, deported, possibly executed. We know this became THIS ALREADY HAPPENS

They literally sent kill teams into Kyiv. This is a real thing that happened in the first days of the war. You think they’ll listen to anything but force? You think Ukrainians trust anything they say when it comes to peace?

This Atlantic article, though it also talks about a truce, makes a little more sense:

Western Support for Ukraine Has Peaked - The Atlantic https://t.co/UMTf4JsJmh

...the economic costs of the war are starting to seriously concern American and other Western policy makers.
...The twin pressures of an ailing economy and surging populism will be on the minds of Western decision makers as they wrestle with a war that will continue to take a toll on the world’s leading economies.
For that reason, the conversations between Ukraine and its supporters abroad are likely to grow harder, not easier, as the year progresses.
Ukraine will come under more pressure, and not just from Henry Kissinger, to concede some territory and allow Russia to save face. Even a hasty termination of the conflict, however, seems unlikely to arrest the world’s slide into greater economic pain....

But a premature truce won't resolve anything. For one thing, neither Ukraine nor the West can just give up on finding Ukraine's lost children:

One of my bigger Ls was when I thought that the claims of child kidnappings were vastly exaggerated Ukrainian propaganda, and then Russia just tweeted out they were real like it was no big deal pic.twitter.com/n7vUiK29AY

And Putin seems to be firing generals again:

Stories circulating that Putin has been going through another round of mass General firing, including the overall commander Dvornikov himself. Mignt be that he doesn’t see the great Russian advances in the Donbas as quite the victories as some have said. https://t.co/rjtkkEMc2x

Russia may not be winning much in the Battle of Donbas anymore:

Well this provides some evidence that the Russians really are running out of steam. Reports that the Ukrainians have actually retaken 20% of Severodonetsk. If confirmed, would seem that Russia has been stymied from taking what was its number 1 priority. https://t.co/9OBP2tLhZX

Here's an observation worth keeping in mind:

Canadian News Media can't shake the "both sides" habit. CTV reporting on the Ukraine war "Neither side appears willing to end this war quickly."

Ukraine is being invaded by Russia. They are the victim here.

But you know, Ukraine is equally at fault for prolonging the conflict.

Moving to other news, here's a final thought about the Ontario election:

H.L. Mencken: Democracy is the theory that the common people know what they want and deserve to get it, good and hard.

And a final thought about Elon Musk:

I feel like watching Elon Musk’s empire implode because he let the world in on what a POS he is is the feel-good, life-affirming story the world needs right now. https://t.co/zh4lT9ITGd

It is Queen Elizabeth's Platinum Jubilee so lots of news coverage all over. Here's the nicest story:

On a weekend of Queen anecdotes, this won't be matched. Just lovely. pic.twitter.com/6z0WjUO2wn

Yes, I can understand why this tourist didn't recognize the Queen - she isn't a particularly grandiose person.
I met Queen Elizabeth once, when I was a journalist in Victoria BC 30-some years ago. She and Phillip were doing a tour and they visited Canada with the Royal Yacht Britannia and they held a reception there for journalists covering the visit so I got to go.
It was all very thrilling and nicely done, and the Queen was very pleasant and charming, but she's not a tall or imposing person - to find her at the reception, you had to look for the place where the crowd was  thickest, and then find the centre of the crowd, and there she was. It struck me that she and Phillip had to spend far too much of their lives making inconsequential small-talk with awestruck strangers - they were both extremely good at it.
Moving along - we subscribed to Disney+ so we could watch The Mandalorian (which is great!) and The Book of Boba Fett (which is pretty good) and now we've watched the first two episodes of Obi-Wan Kenobi.
It's....not great.
I can quite understand why fans are annoyed by Third Sister and child Princess Leia - the characterizations are both really annoying, and neither of the actors are good enough to make you forget it. So I appreciated this Irish Times review:

The author Patrick Freyne also wrote what has been described as the best opening paragraph to an article ever written. Here it is: