Revisionism about the convoy insurrection:
Remember Canada 5 months ago? The Convoy Insurrection destroying Ottawa's downtown, border blockades messing up trade, protestors fanning out across the country to block nurses and doctors from going into hospitals, thousands of counter-protestors risking street fights, a spreading contagion of trucker blockades all over.  It was madness and it needed to stop.
The Emergencies Act was what did it.
So now here we are 5 months later. And we are seeing bad-faith attempts to gaslight Canadians, to establish a revisionist history that minimizes the emergency we were facing, that pretends everybody was acting all calm and reasonable and willing to compromise, that denies the seriousness and the danger Canada was in.  The last refuge of a scoundrel is when the media starts talking about optics -- because they cannot identify any actual malfeasance or misconduct, because Trudeau and Mendicino didn't actually do anything wrong.
So before I get into today's tweets, I just wanted to post a few photos from last February -- remember these?
I must admit that until I hunted these photos down, I myself had forgotten about some of the more bizarre happenings around the convoy insurrection - case in point, the protests at hospitals - how stupid was that? 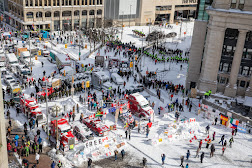 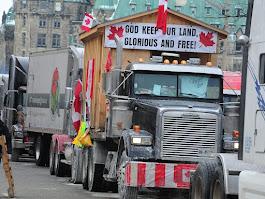 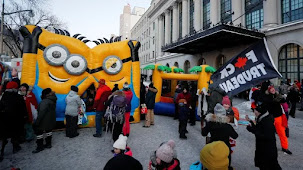 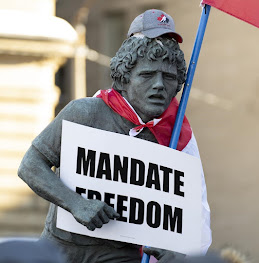 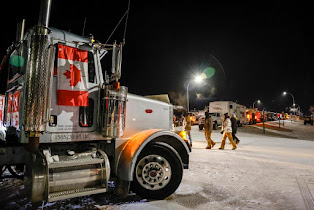 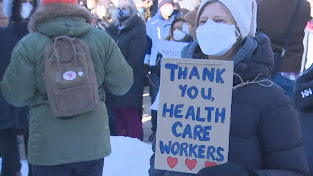 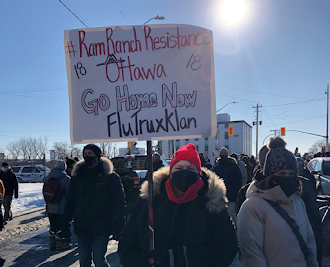 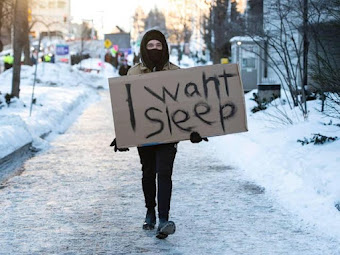 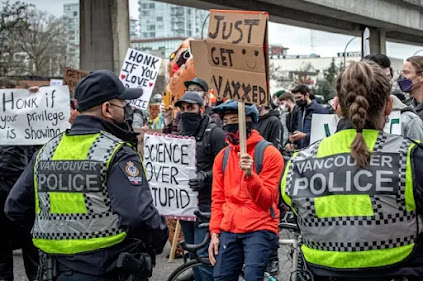 Sunshiny has a great tweet thread today that reminds all of us what was going on over three weeks in January and February:

Conservatives are using gaslighting to falsely portray the use of the Emergency Act. We need to spread the facts to counter the Cons.

Here the facts, a timeline, plus frightening details on what the Conservative Movement is up to.#cdnpoli https://t.co/w2FmZlxLOO— Barb🌻Spread the Truth and vote for liberals! (@barbetta1) June 11, 2022

Here are some of Sunshiny's tweets, remembering the awful details:

Photos of the weapons and military equipment were circulated in MSM and Twitter.

Several far right accounts claimed it was a set up. That the police (RCMP) had set up the protesters and planted weapons and paramilitary white supremacist insignia laden flak jackets & backpacks.

Flash forward a few months and we now have con operatives trying to completely undermine the rationale for the EA in desperation.

Bear in mind at the time of the convoy activities, border blockades were expanding and being erected in Manitoba, Ontario and BC.

An incredible conspiracy theory emerged immediately after the murder plot arrests, 4 of them for the attempted murder of RCMP.

Those 4 were members of Diagolon, an American-style paramilitary white supremacist group intent on violent coups in both US & Canada.

I distinctly remember excuse after excuse why the police could not remove the Ottawa occupation. And the fact RCMP were at risk of being murdered with high powered military grade rifles is as good enough reason as any other to have invoked the EA.

Don’t let the people seeking to destroy democracy gaslight you. The EA was required to dismantle a growing national security threat.

That’s all it was used for: to protect Canadians from foreign and domestic saboteurs, subversives and seditionists.

And here's what happened today in Ottawa:

This is getting serious. A credible threat of explosives near Parliament, arrests already made. https://t.co/ssYmEhvkzb

And can you imagine Pierre Poillivere "taking charge" in a moment of national crisis?

The Chattering classes and Laurentian elite gatekeepers are ignoring or dismissing PP at their peril. The Convoy was not a one off “freak” event, it was the signal of a new hyper polarized political environment in Canada

He's deadly serious. And he's a deadly threat. Quit thinking he's the bomb that will defuse itself. It's up to the rest of us to get that job done. And that starts with the job of opposing him better and managing economic fears more effectively (Here endeth the sermon).

Tonight Evan Scrimshaw takes on the question of whether Poilievre's success is inevitable. His answer - no:

...How is Skippy going to win the suburbs if he doesn’t give a clear declaration that he will extend the child care deals? How does he avoid losing votes to his right if he does that
...the Trudeau Premiership has been a response to three crises – Brexit, Trump, and COVID. As the world has needed leadership the most – as the States and the UK have shrunk from the global stage, weakened and rife with internal divisions that occupy all their time, Canada has had to survive. Getting out of the Trump Presidency intact – with NATO and NAFTA mostly how Obama left them – was a success, and it took tact to pull off. The Liberals have done the big things right, and the idea that there will be some huge appetite to get rid of them just because they’ve hit an arbitrary length of time in office is absurd.
...this consensus that Poilievre is some shoe-in completely avoids the question of Poilievre’s own agency in winning or losing the next election. His stances he’s taking matter, the things he says matters, the way he talks matters – because the next election is a choice, not a coronation.
The notion that Skippy is on cruise control to Rideau Hall is so absurd as to be barely worth discussing, but within the context of the current political moment, it’s hard to see his opening.
...I just don’t see how Bitcoin and vax freedom is a winning message for suburban parents.

When a coup plot doesn’t succeed, but the conspirators aren’t punished, that’s not a failed coup, that’s a dress rehearsal.

He still does. So does the base. https://t.co/yYcJXGu4hw

Don't overlook this: When Liz Cheney floated "seditious conspiracy" at the hearing it was no accident. She's prepping the public for the absolute worst, like possible DOJ charges. I talked to legal experts who explained her intentions. Very bad for Trump:https://t.co/G7EJRHA26j

She was planning to sell the laptop to a Russian intelligence service. Interesting. https://t.co/cJFIRorwPy

No wonder Republicans in Congress wanted Trump to issue pardons before he left office:

There are 658 panes of glass in the ground floors of the Capitol. Only a dozen were not reinforced prior to January 6.

The insurrectionists knew EXACTLY where those weak points were.

Because they were given advance help — by pro-Trump members of Congress and their staffs.

Pete Wehner: The Moral Desolation of the GOP - The Atlantic https://t.co/naxi6McN3a

Ukraine update:
The struggle is real, though Ukraine is carrying on:

Again, no sign of the Russians able to mount anything like an armored breakout/exploitation. The war really seems to be in an attritional, artillery duel. The Russians can blast areas, but even then have trouble taking them.

As for the state of the Ukrainians, it’s interesting how the anecdotal evidence seems to be taking over, a little strangely. There are stories that the barrage might be leading to real problems with morale, and that has to have some truth.

The Russian army is not large, has suffered major losses, is having major problems replacing front line equipment, and will also have significant personnel problems going forward.

From the Department of Fuck Around and Find Out:
Yesterday I linked to a Huffington Post article from May describing the far-right attempt to take over Idaho. And today this happened:

BREAKING: Authorities have stopped this Uhaul and detained approximately 20 people. They all have the same type of clothing on. Truck was stopped about 1/8th mile from the pride event. We’re working to get more info from police. @KREM2 pic.twitter.com/bez1msBz45

Patriot Front members arrived in a rented box truck in #CoeurDAlene, Idaho today before being arrested. They often use this method of transport despite members telling leader Thomas Rousseau that being crammed in an unventilated windowless U-Haul often makes them panic and vomit: pic.twitter.com/B2LySTSroY

Based on evidence collected and documents, authorities found that the group was planning to riot in several areas of downtown, not just the park, White said.
Police found riot gear, one smoke grenade, shin guards and shields inside the van, White said. They wore arm patches and logos on their hats that identified them as members of Patriot Front, he said.
Police learned about the U-Haul from a tipster, who reported that “it looked like a little army was loading up into the vehicle” in the parking lot of a hotel, White said.
Officials spotted the truck soon after and pulled it over, he said.
...Those arrested came from at least 11 states, including Washington, Oregon, Texas, Utah, Colorado, South Dakota, Illinois, Wyoming, Virginia, and Arkansas, White said. Only one was from Idaho, he said.
The truck was stopped near where the North Idaho Pride Alliance was holding the Coeur d’Alene Pride in the Park event. ...  Patriot Front is described by the Southern Poverty Law Center as “a white nationalist hate group” that formed after the deadly “Unite the Right” rally in Charlottesville, Virginia in 2017.

This is by far the best description of the twice-impeached Cheeto loser that I’ve ever seen. 🎯🎯🎯#FreshVoicesRise pic.twitter.com/5DvjZPuT3t

Here’s the @WSJ story Cena read, prompting him to make the mom’s promise to her son come true:https://t.co/vs0D2B2udD

I said this was going to happen & here we are… Let’s Go Brandon!! pic.twitter.com/6tlxgmLRFK

Jesus looked across the table at God & asked, 'Where you been for 2 years?'
God said, 'Scotland.'
Jesus, with a shocked look said, 'There's been a pandemic for AGES & you've been in Scotland? Doing what?'
God leaned over & whispered,'working from home son. Working from home.
🤣😂