Today's News: From all over

I just watched Global's balancing act.
They have criticized PMJT for going too far and not going far enough at the same time.

But really, Canadian media are just playing another version of "If it's not Scottish, it's crap".
The proposed Liberal legislation to prevent more handgun sales obviously isn't going to solve every gun problem in Canada and the rest of North America. Therefore, argue the cynics, it is worthless and just political.
But the thing to remember is this:
it took more than a century for North America to create this gun culture problem -- a century marked by wars around the world, plus significant improvements in gun designs and manufacturing capacity due to billions in government armament purchases, plus the deliberate fostering of the "gun rights" legal framework in the US.
So there will never be a single piece of legislation or even a single legislative plan that will solve North American society's gun problems. But Trudeau's attempts to limit handguns is progress, just as limiting assault rifles is progress, and improving background checks, and improving society response to red flags, etc etc.
Inch by inch, it can be changed.
When I was 20, nobody wore a seatbelt to drive. By the time I was 30, everybody wore them all the time.
When I was 40, everybody smoked indoors everywhere. By the time I was 55, the only place people could smoke was outside.
So yes, society can change.

Prime Minister Justin Trudeau is one of the most successful progressive leaders in the world and it scares the shit out of the US Republicans.

American right wing pundits and politicians tweeting about PM Trudeau’s hand gun restrictions is scaring them. I really don’t care, do you?

A reminder (since Tristin Hopper apparently forgot) that the vast majority of Canadians are perfectly fine with that #cdnpoli https://t.co/en5E9InMlf

Canada: We are banning handguns and assault rifles
MAGA: No guns, we ain't gonna go to Canada
Canada: That worked better than we thought...

Moving to the Uvalde school massacre, I saw this cartoon today: 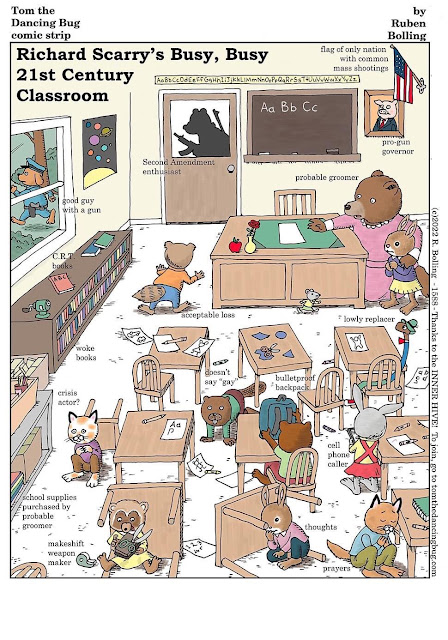 The chaos is increasing:

Well they just got caught in another LIE, trying to blame a teacher for leaving a door propped open when video surveillance shows she removed the rock and closed the door shut. No wonder they won’t cooperate. They can’t keep their lies straight! https://t.co/dUlXQZ9Szc

The Uvalde school police chief was recently elected to the city council and instead of resigning as any principled person would do, he was sworn in tonight by the mayor secretly after the weekly council meeting was cancelled.
So it looks like they're just going to try to brazen it out.

BREAKING: Pete Arrendondo, the Uvalde police commander who told officers NOT to enter the classroom for 78 minutes while the gunman was still shooting and kids were bleeding out, was secretly sworn in tonight as a Uvalde City Council member.

No media — no messy press questions.

“The oversized, over-resourced law-enforcement community of Uvalde passed most of those 78 minutes doing what American police do best: keeping the angry and bitterly confused masses in line.” @Will_Bunch @PhillyInquirer #DefundThePolice #BuildCommunities https://t.co/ZL6oW07dLn

The Houston Chronicle is reporting tonight:

Today was also the day that the Trump Russia scandal got some additional coverage.
I'm not even going to try to summarize all this, but the Trumpsters have spent years now trying to rid themselves of their pro-Russian stench by turning it around against Hillary. Finally today a jury got the chance to weigh in and it took them just a few minutes to kick the whole case out of court.

Big blow to John Durham / Bill Barr project of punishing those who warned the country about Russia's support for Donald Trump https://t.co/NoB2szJmgn

This was a corrupt effort from the git-go.
...this absurd indictment that was ignominiously tossed this afternoon. This was never a true investigation or prosecution. It was always a political assignment created by Bill Barr for the benefit of Donald Trump. Corrupt from the first moment, fruit of the poison tree.

And Trump was absolutely furious:

Trump, who has obsessed about the Sussman trial every single day since it began, is not happy with the verdict. pic.twitter.com/ip0FjY6rN4

Almost 20 years ago, British Columbia led the continent in creating Vancouver's safe injection site for drug users, and today BC is leading the way again in recognizing drug use as a health issue, not a criminal issue:

If my brother had clean supply he would be alive today. My brother was probably an ideal candidate for a project like #NAOMI. End the stigma. Thank you @CityofVancouver #decriminalization #Vancouver https://t.co/a2C1Dr1v8Y

A progressive move against the #OpiodCrisis that will save lives. #Decriminalization “treats addiction as a health issue, rather than a criminal one.” More people will seek help knowing they won’t be prosecuted for possessing small amounts of illegal drugs https://t.co/advqym2CxE

There is Canada-wide support for this, particularly from police:

Remember, the government is more conservative on this than the country's chiefs of police. https://t.co/zsZXYZyjyt

I hope other provinces and cities will also be considering such initiatives.
Turning to Ukraine, here's a piece of good news - more than three quarters of the 2022 crop is planted:

1. If this is accurate, Ukrainian farmers have managed to plant 78% of last years acreage this year. What a heroic accomplishment in the midst of war. This also means that Ukraine's ag production in 2022 will not be down nearly as much as many feared, if weather is decent. https://t.co/39727lCifG

The war proceeded today with Russia likely close to controlling Severodonetsk in the east while the Ukrainians are mounting a counter-offensive to retake Kherson in the south. NATO is still being appropriately cautious about provoking Russia into a nuclear exchange, but I get the impression that Western anxiety is declining, especially as Russia's capacity to continue to make war appears to be declining:

Here is the American message to Putin -- and to appeasers like Kissinger, the NYT editorial board and others -- from Biden's statement published today in the New York Times:

... America’s goal is straightforward: We want to see a democratic, independent, sovereign and prosperous Ukraine with the means to deter and defend itself against further aggression.
....That’s why I’ve decided that we will provide the Ukrainians with more advanced rocket systems and munitions that will enable them to more precisely strike key targets on the battlefield in Ukraine.
....We do not seek a war between NATO and Russia. As much as I disagree with Mr. Putin, and find his actions an outrage, the United States will not try to bring about his ouster in Moscow. So long as the United States or our allies are not attacked, we will not be directly engaged in this conflict, either by sending American troops to fight in Ukraine or by attacking Russian forces. We are not encouraging or enabling Ukraine to strike beyond its borders. We do not want to prolong the war just to inflict pain on Russia.
...Standing by Ukraine in its hour of need is not just the right thing to do. It is in our vital national interests to ensure a peaceful and stable Europe and to make it clear that might does not make right. If Russia does not pay a heavy price for its actions, it will send a message to other would-be aggressors that they too can seize territory and subjugate other countries. It will put the survival of other peaceful democracies at risk.
...Any use of nuclear weapons in this conflict on any scale would be completely unacceptable to us as well as the rest of the world and would entail severe consequences.
Americans will stay the course with the Ukrainian people because we understand that freedom is not free. That’s what we have always done whenever the enemies of freedom seek to bully and oppress innocent people, and it is what we are doing now. Vladimir Putin did not expect this degree of unity or the strength of our response. He was mistaken. If he expects that we will waver or fracture in the months to come, he is equally mistaken.

Here is why Russia needs to be kicked out of this country:

My message: it’s impossible now to allow Russia to grab new territories or agree on long term occupation. It’s not really comparable to 8 years of Crimea (I tell without undermining their sufferings).I’m afraid in the South is closer to Bucha and Irpin. https://t.co/kARjGFYsfy

Even if you are a complete amoral asshole, sending Ukraine whatever arms they need is the best return on investment for defense spending we have ever seen.

Among the many profound crises Americans face as a nation--the threat to democracy, guns, racism, misogyny, inequality, the climate crisis, aggressive enemies at home and abroad--I fear one of the most consequential is the shortness of our attention spans.

The threats do not abate, only our attention to them does. Our enemies know this, count on it and use it to their advantage. We are a country for which collective Attention Deficit Disorder may ultimately prove fatal. It has already taken a brutal toll.

Here's Tom Nichol's comment about the upcoming US midterms:

Never really understood the whole: "Biden isn't progressive enough, so let's not vote and give power to the GOP". More like a toddler tantrum than an adult approach to civil life.

And a commenter noted this brilliant David Sedaris quote about the vote choice from 2016: 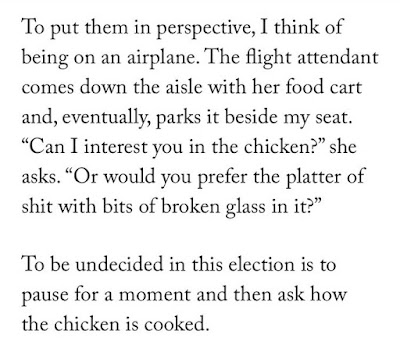 Today's oddball stuff:
Tucker Carlson is such a white supremacist he picked a fight with BTS fans. Oops!

yes tucker pick a fight with the k pop fans you can take them https://t.co/dcy7rRBeAt

And you can't make this stuff up:

Nah. Here in the free-range insane asylum that is the Untied States, we just call it, "Tuesday."

And here's today's time-waster - next time you have a couple of hours to spare, start following these replies and humming along:

Okay Stranger Things using "Running Up That Hill" has me thinking. What's the best use of music in film or TV? And why is it "Hide and Seek" by Imogen Heap in The OC?