Today's News: From Ketchup to Reverse-OPEC 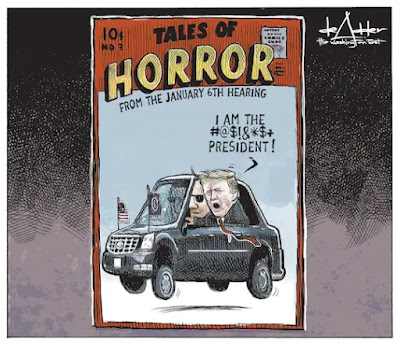 We probably should've known that presidency would end with ketchup dripping down a wall, but then, Heinz sight is 2020.

The Cassidy Hutchinson testimony at the J6 Committee hearing today showed that Trump's White House was terrified they would all find themselves breaking the law, particularly if Trump had actually joined the mob breaking into the Capitol as he intended to do.
Former U.S. solicitor general Neal Katyal told the Washington Post “The picture painted today is one of Trump assisting with an insurrection”
Josh Marshall writes about the impact the J6 Committee hearings are having:

...the hearings become not just an account of what was found but a tool for advancing the investigation. They are already very focused on getting Pat Cipollone to testify.
We have all gotten used to how much the GOP and official Washington can absorb and normalize about Trump’s conduct and criminal behavior. But in this testimony today I think the committee may have gotten there.
’m not sure Meadows, Cipollone and others are going to be able to continue refusing to testify. The committee has also increased pressure on the DOJ, though we don’t know just what DOJ already had in the works...

If the Secret Service had allowed Trump to be driven to the Capitol at the head of his mob, what would have happened then? Would he have gotten out to speak? Would he have tried to go to the floor of the Senate to confront Pence? Maybe flanked by the Q shaman? The mind reels.

Wow. Just wow. What a sorrowful experience, hearing #Hutchinson’s testimony. Tragic. But at least we know the truth. #donaldtrump is nothing but a low life mob boss.

Had Pence and congress members been killed by the mob, pretty sure martial law was on the table, and not to protect congress. Which way would the military have gone? Allow Trump's coup? or stage a military coup to save the country?

This tweet raises an interesting question - what actually happened in the White House AFTER the Jan 6 insurrection was unsuccessful. Here's an argument that for the next two weeks, while Trump was being impeached again, it was the US military that was really running the country:

Sure, absent unqualified support from the military the attempt was probably doomed to fail, but a coup attempt is still a coup attempt and we were damn lucky they didn’t start killing legislators.

President Biden is leading an effort to manipulate the oil market at a scale the world has rarely seen, embracing cartel-like tactics in an aggressive but risky attempt to undermine Russia’s war effort in Ukraine.
At the Group of 7 nations meeting this week in the Bavarian Alps, Mr. Biden has attempted to assemble an upside-down version of OPEC, the world’s most powerful oil cartel, with the goal of soothing consumers burned at the gasoline pump and, if the allies get their way, helping to speed the end of the war.
Instead of limiting supply to maximize revenues for countries selling oil, as a cartel does, Mr. Biden is trying to minimize how much one particular seller — Moscow — reaps from each barrel. He led his Group of 7 counterparts to agree on Tuesday to a plan that would cap the price of Russian oil, as a way of driving down the revenue ...
“Limiting the cost of Russian oil will put downward pressure on global energy prices,” Ms. Yellen said in a news release, “in a way that dampens the impact of Putin’s war on the U.S. economy.”

The G7 has agreed to explore a global price cap on Russia's oil sales. This would be a first-of-its-kind sanction: a reverse OPEC to cut the Kremlin's revenues.

How could it work? @crmiller1 and I made the case for a price cap in @ForeignAffairs 👇https://t.co/jMNNv5AIAP

In news related to the Russia Ukraine War, there was good news today about NATO:

And yes, Biden was behind it all:

NEW: Turkey has dropped its opposition to Finland and Sweden joining NATO thanks to Biden who played a significant role in brokering the deal in case you were wondering why he's over there right now. #NATO

NATO agreement on Sweden and Finland joining is no small thing - and one more Putin miscalculation. @NATO is bigger, and more forces forward-deployed and is more united. Where’s the three-dimensional chess?

And the UK defense bulletin tonight says there is a chance Russia was not deliberately targetting the Kremenchuk shopping centre after all but has only poorly-aimed weapons.

UK MOD- It is almost certain that Russia will continue to conduct strikes in an effort to interdict the resupplying of Ukrainian frontline forces. Russia’s shortage of more modern precision strike weapons and the professional shortcomings of their targeting planners will... pic.twitter.com/TSeVc91CMt

Here is some other news - its the anniversary of the death of Terry Fox: