Today's News: The War on Women 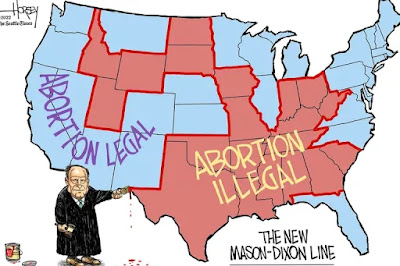 The loss of abortion rights in the United States is the news of the day -- the US Supreme Court has overturned Roe V Wade, redefining women's rights and allowing states to stop women from getting abortions.
After deciding 40 years ago to make abortion into a divisive partisan issue, Republicans have finally caught the car.
Republican state legislatures and governors spent years pandering to their pro-life voters by passing rigid, cruel but meaningless laws criminalizing abortion -- they thought draconian laws didn't really matter because Roe V Wade would never be overturned anyway so they would never have to try to enforce them.
Meanwhile, the American Pro-Life Taliban were entranced by their hazy water-coloured memories of how marvelous America used to be, back in the good ol' days before Roe V Wade -- back when men were men and women were women and "decent" women were ashamed to get pregnant "out of wedlock" and the bad girls give birth secretly in maternity homes thus ensuring a "domestic supply of infants" for adoption while the girls crept home in shame.
Yeah, good times....
So here we are -- today, all of a sudden, Roe V Wade is overturned.
And all those awful laws criminalizing abortion are now in effect.  So criminalizing abortion has created a "War on Women" just as criminalizing marijuana created a "war on drugs" 70 years ago.
But society has changed -- women aren't ashamed of having sex any more, or of getting pregnant, and for 50 years abortion has been just another medical procedure that sometimes women needed. Society no longer views pregnancy as something embarrassing.
But by criminalizing abortion, these stupid awful laws have criminalized everyone associated with abortion - the teenagers and the young couples and the entropic pregnancies and the families, the doctors and nurses and pharmacists and social workers, even the taxi drivers. They're all supposed to be going to jail now.
That'll show 'em who's boss!
Folks, its just not going to work.
The New Yorker has a major article today on this:

"have entered an era not of unsafe abortion but of widespread state surveillance and criminalization—... of anyone who comes into meaningful contact with a pregnancy that does not end in a healthy birth." https://t.co/VBS1xK88A0

...   The future that we now inhabit will not resemble the past before Roe, when women sought out illegal abortions and not infrequently found death. The principal danger now lies elsewhere, and arguably reaches further.
We have entered an era not of unsafe abortion but of widespread state surveillance and criminalization—of pregnant women, certainly, but also of doctors and pharmacists and clinic staffers and volunteers and friends and family members, of anyone who comes into meaningful contact with a pregnancy that does not end in a healthy birth.
Those who argue that this decision won’t actually change things much—an instinct you’ll find on both sides of the political divide—are blind to the ways in which state-level anti-abortion crusades have already turned pregnancy into punishment, and the ways in which the situation is poised to become much worse.

Locating the demand for abortion access in the courts made it a fight waged mostly by lawyers, which in turn pushed the movement—including providers and people who have abortions—to the margins.https://t.co/W7Um5gCwkp

The anger is palpable:

The tyranny of the minority, their glee at banning abortion and expanding carrying guns is nauseating.

…vote cause they assumed she would win. And most of all James Comey for writing that dumb fkng letter. Congratulations.

Liberals need to be single-issue consistent voters on abortion and guns the way Republicans are.

Hillary was right about everything.

GET READY, GAYS. YOU’RE NEXT.

I don't think the anti-abortionists ever expected that corporate America would actually step up to help their employees - will they be considered as "criminals" too?

The CEO of Dick’s Sporting Goods on LinkedIn pic.twitter.com/maqYINYSUQ

Nor did they expect district attorneys would refuse to prosecute:

NEW: 83 prosecutors across the US have pledged to not prosecute abortions. Some are district attorneys and attorneys general in blue states, but the list also includes prosecutors in states with trigger laws and pending abortion bans. via @fjp_org:https://t.co/8IuVyJEgIK

And it has vastly expanded the election battlefield in the Unites States:

Make no mistake, the GOP just lost the American suburbs for a generation.

I SAID IT BEFORE, I'm saying it again. LOCAL ELECTIONS MATTER. Gotta go for it #GoodTrouble
Get people they want, from their neighborhoods to be on city council. #VoteThemAllOut2022

As a Canadian I'm not sure what's worse. The fact that our neighbours to the south just set civil rights back 100 years by legalizing Christian sponsored reproductive slavery, or the fact that bunch of mutants in my country are applauding it and hoping it'll happen here.

The U.S. Supreme Court decision overturning the right to choose is extremely disturbing. As a Canadian, don't forget that last year 82 Canadian Conservative MPs voted to restrict abortion rights in Canada! Let's not be smug when we should be vigilant.#cdnpoli https://t.co/hrkG7IaWBX

CBC: Today we're joined by a cancer patient and a malignant tumour to get both sides of the chemotherapy issue.

"Canada needs a law" is treating the US reality as our own. It's not.

Just a couple of items of other news tonight -- Trudeau gave an interview which describes the rationale for Liberal government actions on the Emergencies Act, vaccine mandates and related issues:

The Government of Saskatchewan is planning a humanitarian flight from Warsaw to Regina on July 4, with capacity for 230 passengers.

Displaced Ukrainians can now register for the flight directly through Open Arms at:https://t.co/xNr1WjMAUf.

According to Foreign Policy, the US now joins such human rights champions as Iran, N. Korea and Russia in denying women autonomy over their bodies. But in 2016, the majority of white women voters were feeling that "economic insecurity" and pulled the lever for the rapey guy. The rest, as they say, is history. Sad.

Great comment Cap
Too many voters - Canadian as well - believe it "doesn't matter who you vote for, they're all alike!"
They're not.