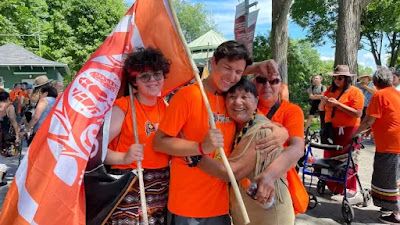 The Pope's reconciliation events were in Quebec today - above is a photo of a delegation from the Innu community of Mashteuiatsh, where the last Quebec residential school closed in 1991. The group of a dozen people walked 275 km to reach the Quebec City reconciliation events, and included members of the Innu, Anishinaabe, Naskapi, Wendat and Atikamekw communities.

Launière-Mathias, the executive director of the non-profit group Puamun Meshkenu, said the seven-day adventure cultivated a sense of "collective pride."
"It was teamwork. Each person travelled the kilometres that they could. When they weren't walking, they were supporting each other emotionally and spiritually," he said. "It was a reflection of our communities, our nations."

It was another example, I think, of the remarkable sense of community evident in this reconciliation visit.
In spite of the words of Trudeau and Simon, below, I don't think we are going to be seeing anything more now from Pope Francis and the Catholic Church than has already been given.
But this visit created a sense of community among Indigenous people across the country -- it was one of the things that made this visit worthwhile and it will have an impact on the future.
I also hope the Pope will remember how seriously Canadians believe the Catholic Church needs to rescind the Doctrine of Discovery.

I sat down with both @Pontifex and Cardinal Pietro Parolin yesterday afternoon. We spoke about the importance of the Roman Catholic Church’s continued work with Indigenous Peoples to advance healing and reconciliation – and the need for the Church to take real, concrete action. pic.twitter.com/SJVtA8LL5P

They painted the banner late last night, Chelsea Brunelle said. It was a bit of a last-minute decision but felt necessary. "A missing piece of reconciliation in this visit of the pope, his pilgrimage, is action."

The banner was facing away from the Pope, toward the congregation, but they think he got the message. The Prime Minister said he raised the issue and Canadian Bishops say they're "working with the Vatican ... with the goal of issuing a new statement from the Church."

'It's not enough to just apologize' -- Protesters urge @Pontifex to rescind Doctrine of Discovery, holding up banner during mass near Quebec City, by @AntoniNerestant @vestevie https://t.co/OnOoKMlxgI via @cbcnews #PapalTour #reconciliation https://t.co/62c9fFIZGy

PM Trudeau
“For decades First Nations, Inuit, and Métis have been calling on the Pope to recognize the spiritual, cultural, emotional, physical, and sexual abuse their children endured while attending these residential schools. For decades, they have been waiting for an apology.”

It was a powerful moment during the Pope’s visit to Treaty 6 on Monday, as a woman stood in her regalia and sang an emotional rendition of O Canada in Cree directly to the leader of the Catholic Church following his apology to residential school survivors. pic.twitter.com/LO3eIiT8ac

These two saved my spirit today. It has been a long week but seeing Stevie and Abigail dance by in their jingle dresses at St. Anne de Beaupré was soothing. Grateful for Indigenous women, for standing strong, for being seen. #allmyrelations . Pix by ⁦@JoleneBanning⁩ pic.twitter.com/ZMhs9jGVwU

Email ThisBlogThis!Share to TwitterShare to FacebookShare to Pinterest
Labels: reconciliation

I suspect governments have been quietly lobbying the Vatican not to rescind the 15th century Discovery Bulls. The implication for property rights in the Americas would be profound.

But it really doesn't matter whether the Pope rescinds the discovery doctrine. The Canadian government could

simply repudiate the doctrine itself. In fact, the Truth and Reconciliation Commission called on the federal government to do just that. Now that Canada has committed to implementing UNDRIP, we will need to build a different foundation for property law.

Cap you are probably right. Also, I did not realize Canada could act on its own regarding the Doctrine. Yes, we need to do this. Its a journey for all of us, I think.