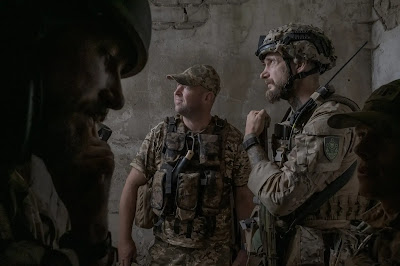 Lots of news from Ukraine lately:
First, a new deal was announced today to move Ukrainian grain through the Black Sea:

New: A deal allowing the export of Ukrainian grain through the Black Sea has been signed in Istanbul, the UN SecGen says. The agreement will include three Ukrainian ports, including Odesa, and will involve a Joint Coordination Center established in Istanbul. via @TimListerCNN

“There is to be no large-scale demining of Ukraine’s ports, a process that was considered too time consuming. Ukrainian pilots will guide commercial vessels from the ports. Minesweepers will be used as needed”https://t.co/2psD1VWgGz

Gee, what a coincidence that the grain deal was signed today. https://t.co/HfPI9Lr2ZE

The agreement to unblock Odesa would have been impossible without HIMARS. It's now very clear that the war will end earlier if we arm Ukraine faster.

However, some caution is warranted:

Prime Minister @JustinTrudeau says he has no confidence in Russia to uphold its end of a deal to reopen Ukrainian Black Sea ports for grain exports. #PutinFlation pic.twitter.com/Hq8870r56m

UK MOD- In the last 48 hours, heavy fighting has been taking place as Ukrainian forces have continued their offensive against Russian forces in Kherson Oblast... Russia is likely attempting to slow the Ukrainian attack using artillery fire along the Inhulets River pic.twitter.com/QZhhb9Lpnl

I wonder if this can this be true?

⚡️Official: US may supply fighter jets to Ukraine.

John Kirby, a spokesman for the U.S. National Security Council, said that the Pentagon had already started evaluating the possibility of such a move.

All of the old arguments about the risk of starting World War 3 still apply, I think, but if Ukrainian pilots can be trained quickly enough this improvement in airpower might make a difference.
And there seems to be lots going on in the Kherson region as well as in the Donbas:

Wow; more than 100 high value targets taken out by Ukraine: you can see why General Milley was talking about the impact of the Ukrainians using the HIMARS and other systems so effectively. That has to be hurting the Russians badly https://t.co/mWkDQhIwCn

Within just weeks, a few HIMARSs have managed to strip Russia of the majority, if not all of, its most considerable ammunition and fuel depots in Donbas and Ukraine’s occupied south.

Ukraine refuses the enemy's request for a green corridor for thousands of soldiers to exit Kherson region. Ukraine demands their surrender of troops and equipment otherwise they will be eradicated. https://t.co/KhOMb0aX3I

More and more Ukrainians are talking about attacking https://t.co/wG57CaXaIs

In other news, here's a good one (well, not good, really, but funny at least):

“Just leave off ‘belongs to me,’ Mr. President, and you’re all set.”

How many times did Trump "joke" in public about remaining President beyond two terms?

This is something I've written about before but wish got more attention: there were multiple constitutional crises in Trump era. Some were his crimes but others were staff/military working around Trump (rather than using constitutional remedies of impeachment & 25th Amendment) https://t.co/gxgV0XK1ak

An astonishing number of Republicans and former Trump aides have calmly, factually testified under oath that the entire country was put at risk by the front-runner for the 2024 Republican nomination.

If you know Donald Trump at all you know that the thing that will bother him the most about the entire J-6 hearings is the showing of the out-takes of his speech because it confirms his worst thoughts himself when he is alone in the dark.

I just wanna give a big shoutout to Kevin McCarthy for throwing a fit and not seating any Republicans on the Committee.

Imagine what a circus this could have been turned into.

I don’t know who put that Hawley hit out, but right now his tiny tiny testicles are a hood ornament on Liz Cheney‘s SUV.

In other news, did the Red Sox send all their pitchers to Toronto by mistake?