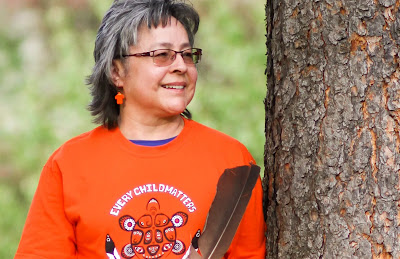 Sept 30 is the National Day for Truth and Reconciliation, also called Orange Shirt Day - for settlers, it is a day for thoughtfulness, remembrance, acknowledgement of wrongdoing, apology, and promise to do better.
Here are some tweets and stories to share.
At first I thought, is this tweet for real? But yes, it is, and really, its great:

Not a fan of the commercialization of Orange Shirt Day/National Day for Truth and Reconciliation, it can be cringy if done wrong. But man did they ever get this right. Incredibly powerful and legitimate in my opinion. Give it a watch, decide for yourself. https://t.co/kJclNK2IKi

Here is the background to the Orange Shirt:

Orange Shirt Day is a legacy of the St. Joseph Mission residential school commemoration event held in Williams Lake in the spring of 2013.
It grew out of Phyllis’s account of losing her shiny new orange shirt on her first day of school at the Mission, and it has become an opportunity to keep the discussion on all aspects of residential schools happening annually.
Phyllis (Jack) Webstab's Story:

I went to the Mission for one school year in 1973/1974.
I had just turned 6 years old. I lived with my grandmother on the Dog Creek reserve. We never had very much money, but somehow my granny managed to buy me a new outfit to go to the Mission school.
I remember going to Robinson’s store and picking out a shiny orange shirt. It had string laced up in front, and was so bright and exciting – just like I felt to be going to school!
When I got to the Mission, they stripped me, and took away my clothes, including the orange shirt! I never wore it again. I didn’t understand why they wouldn’t give it back to me, it was mine!
The color orange has always reminded me of that and how my feelings didn’t matter, how no one cared and how I felt like I was worth nothing.
All of us little children were crying and no one cared.
I was 13 years old and in grade 8 when my son Jeremy was born. Because my grandmother and mother both attended residential school for 10 years each, I never knew what a parent was supposed to be like.
With the help of my aunt, Agness Jack, I was able to raise my son and have him know me as his mother.
I went to a treatment centre for healing when I was 27 and have been on this healing journey since then.
I finally get it, that the feeling of worthlessness and insignificance, ingrained in me from my first day at the mission, affected the way I lived my life for many years.
Even now, when I know nothing could be further than the truth, I still sometimes feel that I don’t matter. Even with all the work I’ve done!
I am honored to be able to tell my story so that others may benefit and understand, and maybe other survivors will feel comfortable enough to share their stories.

Today... Phyllis Webstad is Northern Secwpemc (Shuswap) from the Stswecem’c Xgat’tem First Nation (Canoe Creek Indian Band). She comes from mixed Secwepemc and Irish/French heritage, was born in Dog Creek, and lives in Williams Lake, BC.
Today, Phyllis is married, has one son, a stepson and five grandchildren. She is the Founder and Ambassador of the Orange Shirt Society, and tours the country telling her story and raising awareness about the impacts of the residential school system.

As the day approaches where everyone talks of these places of horror, some of us sit in our memories like it was yesterday. It lives inside of us, the pain associated with the residential schools, the 60's Scoop, the deaths, poverty and addiction that was the gift brought to us💔 https://t.co/fTKGPCnjNu

This is a tough week every year; maybe one year it won't feel so heavy; but in the meantime, keep being YOU, and keep shining as you were meant to shine 🧡 #trc2022 #ResidentialSchoolSurvivor #youmatter2022 #YouAreLoved pic.twitter.com/cZk3LJI7CJ

Thousands of people are expected to gather in Ottawa on Friday for the first-ever commemorative event marking the National Day of Truth and Reconciliation. pic.twitter.com/zUSJohQVSB

There are many events taking place in all corners of the province tomorrow for National Day for Truth and Reconciliation/Orange Shirt Day. We encourage you to part - listen, learn, show up, and share. A full listing at https://t.co/Gp8Wa5Y8VJ #ReconciliationSK pic.twitter.com/PlMRTwVunA

In other news, OMG Florida, this is terrible:

"Essentially if your home is not built out of concrete, to FEMA standards over the last five years, it's pretty much gone. There's literally nothing to come back to."

Dog rescued from sailboat in Fort Myers. He went back and got a cat too. pic.twitter.com/JFcWl4972g

Not all heroes wear capes , they wear chefs uniforms ❤️

In Canada, we will remember Fiona. I was moved by these tweets:

Which is why PM Trudeau rightly stopped by to thank them... pic.twitter.com/YYNWSE0II5

I listened in Edmonton to call ins from people experiencing Fiona keeping everyone informed as CBC kept broadcasting to Atlantic Canada and when they lost power used the NN feed. The power of a national broadcaster …

These bullshit right-wing "controversies" just never stop, do they? This week, its Lizzo and the Library of Congress.

If you do have a problem, stop and think about why that is.

Lizzo, a Black female superstar, collaborating with Carla Hayden, the first African American and first woman Librarian of Congress, to use a flute from James Madison, the Founding Father who originated the 3/5 Compromise and also the Library of Congress itself? The symbolism!!! https://t.co/n5AQsjJwKH

NOBODY HAS EVER HEARD THIS FAMOUS CRYSTAL FLUTE BEFORE

IM THE FIRST & ONLY PERSON TO EVER PLAY THIS PRESIDENTIAL 200-YEAR-OLD CRYSTAL FLUTE— THANK YOU @librarycongress ❤️ pic.twitter.com/VgXjpC49sO

She is actually a classically-trained flautist:

Lizzo also practiced this part of her on-stage performance in the Library's Great Hall on Monday. Wait for it... #LizzoAtLOChttps://t.co/kT2c6Fmnrn pic.twitter.com/pIashO5qp6

I CAN'T BELIEVE that Lizzo pulled James Madison's crystal flute out of a stone and is now the president!!! That is a marginally less democratic process than the electoral college!!!!

Maybe they’re mad because Lizzo knows how to return Gov property w/o having to be raided?

This is so lovely, and the thread is full of great stories too:

Yesterday I adopted the oldest, sickest, and sorest shelter dog. I'll never forget his eyes. When I went into the cage he didn't even bother to look, he knew I wouldn't even see him. 🤍🤍 pic.twitter.com/ySjUjUmrmT

Moving to Ukraine, here are a few interesting tweets I have collected over the last few days:

This is basically my read, too. Things could get very, very weird, and it could happen very, very fast. https://t.co/lfmN53eHnd

I think Ukrainian victory is important for Ukraine and important for the world, yet it’s impossible not to feel huge pity for the poor Russian conscripts now being led to their deaths to feed this monstrous ego. https://t.co/wQXAChIrHE

What’s happening is actually beyond insane.
It’s been over 7 months, but sometimes I still can’t believe my eyes and ears.
A giant meat grinder not seen in Europe since 1945 — and for the sake of NOTHING but a handful of old corrupt farts wishing to stay in power forever.

Its already a failure and may soon be a defeat. Putin set in motion events that have gone beyond his control and destabilised all of Europe, and most of all Russia. I don't think we can pretend to be able to control how this works out now. It is no longer a matter of peace terms.

Tonight the Ukraine military has surrounded Lyman and is preparing to move on the nearby rail hubs Svatove and Starobilsk, which would take half of the Donbas out of Russian control.

The Russian garrison in Lyman may not last the night. https://t.co/DGn9oOxGkz

I second that, based on what I'm seeing in Russia's state media. They used to boast about nuking everybody and their brother, but now it's a chorus of Putin's mouthpieces claiming that they never threatened anyone and wouldn't do it. Something is brewing.https://t.co/qImW69bsdJ

Posted by Cathie from Canada at Friday, September 30, 2022

Weasel words of the day
"100% of proceeds"
means after labor and materials and profit and special expenses NOT total cost paid.
Good possibility the charity gets little and any they might get is tax deductible by timmies.
So increased sales and a tax break.
It is more support your local corporate masters.

Sad, isn't it, that every time a corporation announces some laudable project we all look for the weasel words. They have damaged our trust so many times that we just don't believe them anymore.
In this case, the video was a very positive one, so I really am hopeful that there isn't going to be any tricky accounting.