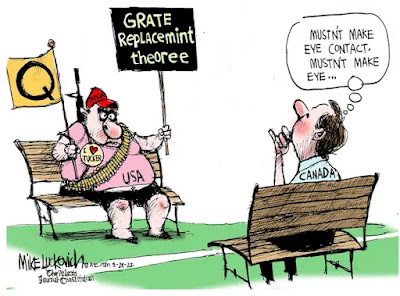 Sorry, I should say: Both the Uvalde *and* the Buffalo shooting are being characterized as false flag operations. Even worse!

The idea that the World Economic Forum is some evil and all-power globalist force, hellbent on forcing this New World Order has grown popular amongst right-wing politicians in the U.S, Canada, and Australia.

(Stories to come on that) pic.twitter.com/Q28alOrF1O

It was simply grotesque to see Trump mangling his reading of the Uvalde victims' names, as a cowbell rang and they kept messing up the timing. Then there was the dancing.

I still can't get over Trump reading the names of the Uvalde victims like a kill list to the sound of bells at the NRA convention. One of the most fucked up things I've ever seen in my life.

Still, this is probably the best he can do at the moment to help his old buddy Putin

Some more tweets related to the Uvalde massacre:

Republicans’ weakness on guns makes them weak on crime — and it’s causing crime to rise.

It was Charlton Heston, one-time celebrity NRA leader, who is remembered for saying something about prying his gun from his cold dead hands. Now, there is this:

“At my school’s shooting” is the grimmest thing I have ever heard. https://t.co/83lo3flR5U

My Child Is An Honor Student At Triangle Shirtwaist High School https://t.co/W5tDQZQ9Q9

i love the argument "well if you make new gun laws, these guys will just get them illegally" as though every would-be school shooter living in his parents' house in suburbia has an extensive network of black market connections that can get him an AR-15 whenever he needs one

The Texas shooter and the shooter at my high school both waited until they were of the legal age. Don’t tell me these laws can’t do anything.

Canada will be improving its gun control laws. I'm hearing the usual sniping about how this legislation is being "rushed" and of course it is - the quicker the better:

Maybe we need to update this 2020 cartoon: 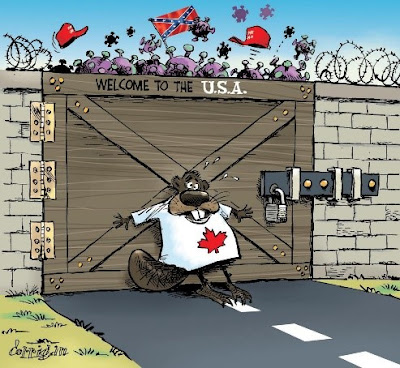 In other Canadian news, it was good to see this report finally out and I think we have a defense minister and a Cabinet that will follow through. Its going to be challenging to transfer jurisdictions to civilian courts (which of course had had their own problems in the past with sexual assault cases) but it sends a message about accountability and transparency:

The release of Louise Arbour's report concludes more than a year of work. Among its 48 recommendations is a call for civilian police and courts to handle all sexual assault cases involving allegations against military members going forward.https://t.co/yS4TrVnY5l

- Returning sexual assault to the jurisdiction of the civil courts ✔️

- Calling out RMC as a breeding ground of misogyny ✔️

We've been begging for this & y'all called us naïve. Yet, here we are!

I maintain that the Justice Arbour report was not necessary. We knew all this already.

But the last time a Justice report dropped, the Chief of the Defence staff said "Sexual misconduct is a result of biological wiring".

Today's tone couldn't be further from that. PROGRESS!

Moving to the latest from Ukraine, I was glad to see that the Ukraine government is telling civilians to move away from the battlefields. I think this should have been happening across southern and eastern Ukraine since February, but at least its finally starting to happen now:

As the Ukrainian military stages counterattacks against Russian forces in southern Ukraine, the authorities on Monday urged people living in occupied towns and cities to flee if possible.https://t.co/49pJixciQ7

The West (ie, Kissinger, the Davos people, etc) have to understand that Russia is committing serious war crimes of all kinds and degrees in all of the Ukrainian territory it has seized:

Exactly! That's why it is a moral as well as a geopolitical misjudgement for usually sensible and moderate leaders & commentators in the West to be musing aloud about territorial concessions https://t.co/2gUGzbi7K3

Here's an interesting Ukraine summary from the Financial Times:

Excellent from @gideonrachman. The west must hold its nerve on Ukraine https://t.co/GjgJvwcvRk

The war in Ukraine is essentially being fought on three fronts and among three protagonists. The first front is the battlefield itself. The second front is economic. The third front is the battle of wills. The three participants are Russia, Ukraine and the western alliance backing Ukraine.

Ukraine appears to be mounting an attack to retake Kherson in the south:

We saw training videos on M-113 and t72. My guess is they are fresh formations now committed there.

Kherson is lightly defended compared to the east and a massive opportunity for Ukraine.

The United Nations has released some figures on civilian casualties in Ukraine in the three months of war - they haven't been able to gather numbers in occupied areas, however :

In Mariupol, Russian troops have completely destroyed over a thousand of high-rises, says city mayor Vadym Boychenko.
Almost every destroyed house that was turned into rubble has 50-100 bodies of people buried under it, adds Boychenko.

And in other interesting stuff today:

#BruceWayne is trending. Did he try to buy #Twitter?

This thread and article are priceless:

Hard Drive Apologizes to Elon Musk for Dunking on Him Too Hardhttps://t.co/MiBvjl3jXb

This takes the cake as the 2022 Headline Of The Year:

The Mona Lisa had cake thrown at it by a man who reportedly disguised himself as a woman using a wheelchair. https://t.co/1SWrgAk7MO