Mother's Day is coming up so here are some photos I have been collecting showing some of the children in Ukraine:

Here is a beautiful photo of children playing with bubbles, in central Lviv on April 7: 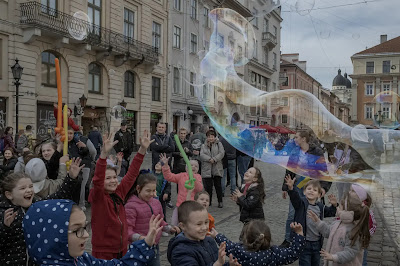 In these Paschal days we cannot but be with our hearts and minds with many people throughout #Ukraine who have lost their dear ones and their homes. Especially we keep praying for children who experience the tragedy of the war so hard but yet with their innocent resillience. pic.twitter.com/0coN9M60Ig

Goodnight my dears 😘 please pray for the valiant ppl of Ukraine 🇺🇦
Especially for the Elderly & the disabled with no one to help them. And the frightened children. #PeaceforUkraine 🙏🏼 pic.twitter.com/i8yVPqdJ8p 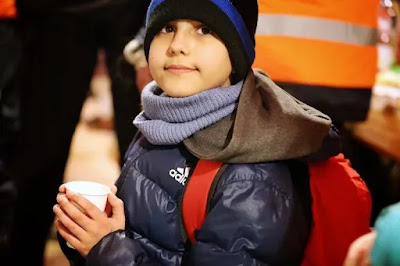 This is Hassan, a brave 11-year-old boy who journeyed a thousand kilometres in March by himself to get to his family in Slovakia - his mother had to remain in southeast Ukraine to look after his grandmother who cannot travel, but she sent Hassan to safety.
Finally, this sweet little angel child. I don't know where this photo was taken but I first saw it in early March: 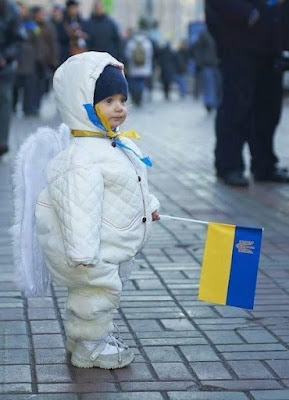 And of course, from the Oval Office:

🐾 Do not underestimate the pawer of furry friends. Pets are family and these brave, amazing children know it! In this soulless darkness Putin unleashed over Ukraine’s brave hoomans, pets bring a ray of light and hope. Support animal rescue orgs in 🇺🇦: https://t.co/WN6tu7Alw3 pic.twitter.com/4WJZUE4AQx

In other Ukraine news, Ukrainian military are pushing Russia out, village by village:

ISW- “The Ukrainian counteroffensive north and east of Kharkiv city secured further gains in the last 24 hours and may successfully push Russian forces out of artillery range of Kharkiv in the coming days”https://t.co/HZaLJNudLU pic.twitter.com/s9jZuH7XfC

...the collapse of Russian lines around Kharkiv has become so dire that Russia’s border is at risk, with Belgorod within range of Ukrainian artillery.
...From the very beginning, Russia had too few troops for such a big country. It diluted those troops across too many axes of attack. It pulled out of the Kyiv area after a bloody debacle, but Russia is still spread too thin, and attacks at random, without consideration of any broader strategic goal like that push west of Izyum. Those attacks are the usual drip-drip-drip, proving daily that Russia simply cannot open the spigot and attack en masse. It never has, and seemingly never will.
Ukraine has played it smart, playing rope-a-dope with Russia, attriting its forces, pinning them down, and then counter-attacking judiciously, never over-committing, but probing weaknesses in Russia’s lines. It’s no mistake that Ukraine is counterattacking in the two regions (Kharkiv and Kherson) that have the fewest number of committed Russian forces.
Ukraine is still not ready for a true massed counteroffensive—Russia’s advantage in artillery and air support make that too risky. But the balance shifts slowly toward Ukraine every single day, with every tank and artillery gun destroyed, with every warplane and helicopter shot down, and with every Russian and proxy soldier taken off the field.

Moving to other news:
As the Federalist Society majority on the US Supreme Court now attempts to justify making abortion illegal, people are noticing just how bad Alito's argument is -- his overly-broad, inept and poorly-written draft tries to erase the last century of US civil rights.
If this opinion stands, just imagine how states will try to use it to retroactively outlaw everything from Social Security to gay marriage. This will clog Supreme Court dockets for years and throw US society into chaos:

“Women can’t have rights because they have a deeply rooted history of not having rights” is not the winning argument Republicans think it is.

Given that women’s right to enter into contracts was also not clearly established at the founding, I shall no longer be paying my student loans

I hadn't heard "domestic" used before as a euphemisim for "white", but here it is:

Conservative Supreme Court Justice Barrett, wrote a brief about abortion. She noted the USA needed a “domestic supply of infants” to meet needs of parents seeking infants to adopt. She argued that mothers must birth their baby & give it up for adoption to meet market demands.

Finally, returning to Canada, the reviews are in for the CPC debate yesterday and its not good:

So basically the CPC leadership debate, except for Charest, was all ‘no, I love the fake trucker insurrectionist convoy that wanted to overthrow the democratically elected govt more than you do’.

Having watched, and carefully assessed what was purported to be a CPC Leadership debate last night, I feel able to declare a clear winner. Ladies and Gentlemen, the winner is... drums please...
JUSTIN TRUDEAU! pic.twitter.com/BxXcjIQfDw

The Liberal Party of Canada says they will pay all out of pocket expenses if CPC will double the length of their debates and add a few extra dates. #cdnpoli

Appreciate your candor, Sir. The debate illustrated how the Conservative Party of Canada has devolved into a marginal party. Many vote #CPC because they have always voted Conservative. But if a 3rd party was behaving this way, it would quickly become a 4th party. https://t.co/fXZsmfjR9Z

I missed tonight’s CPC leadership debate but I’ll catch up by walking face first into the backyard door.

And I laughed at how Montreal Simon started his great post today:

I missed yesterday's Con leadership debate live on TV.
I forgot it was on, and by the time I remembered it was over.
And for a while I was sorry.
But then I discovered that I could watch the whole debate on YouTube.
And then I was REALLY sorry.