I have been struck by the number of outstanding photos I am seeing of the brave soldiers fighting for Ukraine. I have been collecting these now for more than a month, and tonight I thought I would post some of the best:
Here are members of the Ukrainian Territorial Defense Forces hold Easter cakes near the trenches, outside Kyiv on April 23. 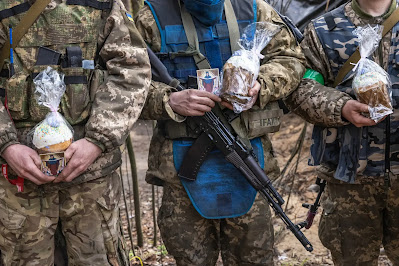 This is Fedir Shandor. He's fighting for #Ukraine.
In a peaceful life, he's my colleague — uni lecturer & the Head of the Department of Sociology at Uzhhorod National University.
In the photo, he's giving online lectures to his students, from the trench on the front line. pic.twitter.com/NPIPAGKWFm

The first female navigator of @UA_NAVY
Eugenia Bakay: "Now you just need to decide - are you ready to defend your country or not".
(1/4) pic.twitter.com/aocqkMd7K7

Damn, what a scary but beautifully written report from @mschwirtz accompanied by incredible photos from @lynseyaddario. I'm so glad you guys are safe!https://t.co/Yo0u6SIT2X

A Ukrainian and A French sniper fighting together against Russian invaders. I feel so much gratitude to the volunteers from different countries who came here to help us fight. pic.twitter.com/Z41XM5QM1A

A fighter in one of the #Ukrainian Special Forces in front of a destroyed #Russian T-72B3.

An amazing photo: Fighters from the Ukrainian army's 30th Brigade take their positions in a trench in eastern Ukraine -photo by Ukraine photojournalist Maxim Dondyuk
https://t.co/5D37YpRVfA

As of now #Ukraine is winning #Russia's war against #NATO. pic.twitter.com/oPRCnedKCT

A #Ukrainian lioness with an important message.

Glory to #Ukraine! Glory to the Heroes, women and men ✊🏻🇺🇦 pic.twitter.com/Wys3QMooIS

I am so impressed by this young soldier, in a photo taken outside Kyiv as the Russians were leaving earlier in April: 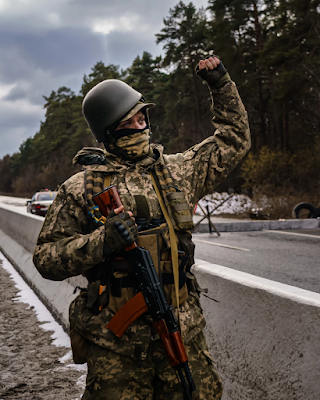 Marcus Yam/ LA Times
How beautiful is this?

This mural was painted on the wall of the Military Academy of🇱🇹in Vilnius by an artist Linas Kaziulionis
It was inspired by a📷by Andriy Andriyenko, which captures a moment of farewell of🇺🇦border guard Vitaliy and his wife at Kramatorsk railway station https://t.co/juApw7Vpwr pic.twitter.com/5GWIt3XAuw

There are so many other First Responders worth highlighting too -- here's a firefighter taking a break: 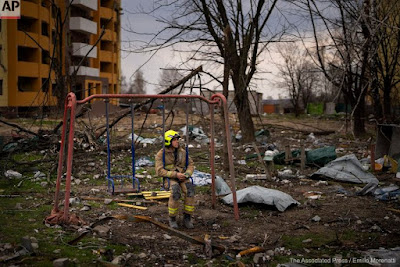 Emilio Morenatti/AP
And here's a fellow who arrived in Ukraine as a volunteer - he's not a soldier but likely should be someday:

20yo Peter arrived in Ukraine from Tennessee to join the armed forces. The refusal didn't discourage him & he started volunteering. Now every day Peter exhumes bodies in Irpin & Stoyanka for their decent burial on the cemetery. "Someone has to do it," he says. Thank you, Peter! pic.twitter.com/m7KDLHENb6

On the Russian side, today's Darwin Award goes to...

Moving back to Canada for a moment, I couldn't resist retweeting this classic:

Freedom? They are literally dancing and PARTYING in the streets in Ottawa right now. People using the word “dictator” and “tyranny” have zero idea. pic.twitter.com/uzaL7q6w67