Today's News: the tide is turning in Ukraine

Just a short posting tonight, but it appears that the tide in Ukraine is turning:

Long story short. Russia seems to be pulling out of the area to the north of Kharkiv entirely, and still cant make significant advances in the Donbas. https://t.co/DE1Fc1TeXL

Ukrainian soldier says that the Ukrainian side used freshly delivered American M777 howitzers to smash 70+ Russian military vehicles to pieces as they tried to cross the Siverskyi Donets River on May 9th.
pic.twitter.com/ia31UBpBBt

Yesterday Markos described this battle here: Russia's river crossing debacle is beyond belief. I think Russia is starting to get worried.

...Those bloggers have begun commenting on the incompetence of the Russian military to their hundreds of thousands of followers."

I can confirm that this is happening, though one of the main responses has also been denial, with claims that the brigade only took 10% casualties.

Then today we got this news:

Army of Ukraine launched a counteroffensive in the Izyum district of the Kharkiv oblast - Kharkiv Military Administration Head https://t.co/mRhRUjMQHF

“The hottest point is Izyum direction. 🇺🇦 Army is counter attacking. 🇷🇺forces are retreating in some directions”
📸General Staff pic.twitter.com/f2CZJMkW3p

...Battle of the Izyum Salient - Russian telegram claims five Ukrainian brigades are moving in on Izyum from the north, looking to directly cut off supply lines to the bulk of the Russian forces in the salient... a Ukrainian brigade is around 1,600 troops and 200 armored vehicles. If these reports are correct, we’re talking about 1,000 armored vehicles, and a metric buttload of artillery, raining on Russian positions....if Ukraine is crossing the Donets to attack Izyum’s supply lines, then this seems like a logical place to do so: 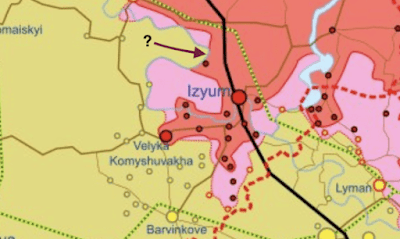 ...with Russia already at its limits, Ukraine is taking direct aim at the largest concentration of Russian forces in Ukraine.
Guys, 20-25% of Russia’s entire Army is in that pocket.
Something big is happening.
I mean big, as in war-altering.. Ukraine is going straight for the jugular instead.

A really interesting and important breakdown of the relative balance between confirmed Russian and Ukrainian losses--which shows one thing very clearly. The Ukrainians have prioritized attacking Russian logistics whenever possible--to great effect. https://t.co/htGhQnPoI6

It is reported that shells that the #Netherlands supplied to #Ukraine bear the words "Revenge for MH17".
In 2014, a #Russian BUK downed flight #MH17 and killed all 298 passengers, most of whom were Dutch. #Russia denies its involvement and refuses to pay compensation. pic.twitter.com/LF2S2COV0Y

The commander of the Georgian Legion riding an ELEEK Atom electric bicycle in eastern Ukraine.

The bikes have become very popular since they make it possible to move silently on the front lines or even behind enemy lines.

There is starting to be talk about a ceasefire, which would be profoundly unfair to Ukraine at this stage - it would abandon far too many Ukrainians behind Russian lines.

If we stop supplying weaponry Putin will slaughter Ukrainians- military and civilian alike. The situation is barbaric and existential- and Putin has left no one any way - other than he must be defeated and driven home. @ZelenskyyUa

Zelensky responding to Macron: “We want the Russian army to leave our land — we aren’t on Russian soil. We won’t help Putin save face by paying with our territory. That would be unjust.” https://t.co/s9wnCEOP3z via @zoyashef

Even in the midst of destruction, this:

The storks have come home
Village of Moshchun, Kyiv Obl
According to🇺🇦beliefs, the stork protects &helps humans. A house with a stork's nest will live in peace, prosperity&good health. A village with many storks will see a bountiful harvest

And great excitement in Ukraine tonight that Kalush Orchestra won the Eurovision 2022 song contest with their song Stefania:

⚡️Zelensky: 'We will do everything to one day host Eurovision in a Ukrainian Mariupol.'

The president thanked Kalush Orchestra for its performance at Eurovision 2022 and all who voted for Ukraine.

"I'm sure our victorious chord in the battle with the enemy is not far off."