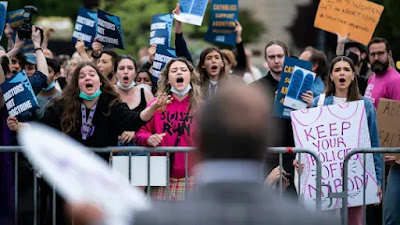 (Photo of Supreme Court protest today, by Jabin Botsford, WashPost)
Today lots of comments and discussions about how the United States is criminalizing abortion again.
I'm not sure which Justice the Washington Post Editorial Board is trying to speak to with this strong editorial, but I think perhaps it was for precisely this reason that the draft decision was leaked, in time to get one of the Justices to reverse course:

....If the justices embrace the sweeping document, they will deal a grievous blow to freedom in the United States — and to the legitimacy of the court itself.
...the draft ruling’s dreadful reasoning and extreme potential consequences are far more concerning than what the leak says about the court’s internal dynamics.
Written by Justice Samuel A. Alito Jr., the document would declare Roe “egregiously wrong,” obliterate its guarantees of reproductive choice and empower lawmakers to abridge at will this long-held right.
...The court’s legitimacy rests on the notion that it follows the law, not the personal or ideological preferences of the justices who happen to serve on it at any given time.
Americans rely on the court to exercise care and restraint against making sharp turns that might suddenly declare their everyday choices and activities unprotected or illegal. Over the course of nearly half a century, the court not only issued Roe but upheld its bedrock principles against later challenges. Throughout, the original 1973 decision enjoyed broad and unwavering public support.
What brought the court to its current precipice was not a fundamental shift in American values regarding abortion. It was the shameless legislative maneuvering of Senate GOP leader Mitch McConnell (Ky.), who jammed three Trump-nominated justices onto the court.
...Justice Alito’s draft claims that the court’s ruling would not imply that other constitutional rights, such as same-sex marriage or access to contraception, are in jeopardy.
But given the brazen abandon with which he would discard abortion rights, his assurances ring hollow. He would inaugurate a terrifying new era in which Americans would lose faith in the court, distrust its members and suspect that what is the law today will not be tomorrow.
They would justifiably fear that rights will be swept away because a heedless conservative fringe now controls the judiciary.

I'm not sure Kavanaugh or Barrett or Alito or Thomas are intelligent enough to understand what they are doing but maybe Gorsuch can be convinced.
Here in Canada, Freeland made a strong statement in the House:

All Canadians—especially all Canadian women who care about a woman’s right to choose—need to be active, vigilant, and speak out.

See my comments from today: pic.twitter.com/f2rxQOw6JP

Freeland gives a full-throated defence of a woman’s right to choose.
Standing ovation except for the Conservatives, most of whom sat silent. A couple of Conservative women MPs clapped fairly quietly, but that was it. #QP

The unspoken part of this is that under the Conservative government, abortion access was not a precondition for Canada Health Transfers, and provinces who restricted access faced no clawbacks. They do (theoretically) under this government (but the pandemic had them refund them). https://t.co/hXXxJ8auhC

Just your Tuesday morning reminder that 88 out of 119 elected MPs from the Conservative Party of Canada, which received the most votes in the last two federal elections, are anti-choice.

Don’t think for a moment that it couldn’t happen here.#RoeVWade

Remember way back in history when every single Saskatchewan Member of Parliament voted to make certain abortions illegal?
That was 335 days ago.

Abortion is a medical procedure, not a right. Canadian Women already HAVE the human right to body autonomy through the other Charter Rights and Freedoms.

What other medical procedure is codified as a right?

None. There’s a reason for that.

Trevor Noah:
And isn’t it amazing, after all these years of the right screaming about the threats of Sharia Law, turns out they were just jealous?

In light the draft Roe v. Wade opinion, one wonders if Clarence Thomas is prepared to rule his own interracial marriage illegal.

Moving to the latest on the Ukraine Russia War, I'm not reading much recently about any significant troop movements on either side, which gives some room for a few other items.
Here's one - I think Russia TV has lost its mind:

1) Threaten the world with nuclear holocaust in WW3.
2) Threaten to destroy Ireland and the UK with a nuclear tsunami.
3) Threaten to starve Ukraine by stealing their crops.

And they wonder why countries around them want to join NATO. 🤷‍♂️ https://t.co/tQcGdYVbEh

Not sure this story is being discussed enough. US sources saying China is not providing Russia extra economic and military aid. This would make a long war scenario much harder for Russia. Also a sign that China doesn’t want to get too close to Putin’s giant cr@pfest. https://t.co/p9ZWLUwyta

Imagine we will see more and more articles like this. How can Ukraine transition to the counteroffensive and what help will it need to do so. Key thing is to do the exact opposite of the Russians. Well planned out and coordinated action that can, crucially, keep casualties down. https://t.co/5N9s3008Fn

So this begs the question, why doesn't Russia attack first, before Ukraine is ready?
Well, maybe because they can't:

Every film that made Russian forces seem like an unbroken mass of Dolph Lundgren clones marching perfectly along in their smartly tailored coats needs to be updated to represent the combination of sniveling incompetence and thoughtless brutality that seems closer to the truth.
... the U.S. Defense Department estimates that Russia has lost about 25% of the force it sent across the Ukraine border. On top of that, the U.K. Ministry of Defense estimates that about 25% of the Battalion Tactical Groups (BTG) that remain are “combat ineffective” due to lacking either personnel or equipment. In recent days, there have been reports of assaults from Russian forces that were far below the supposed scale of a BTG, and there have been translations like this one showing that a BTG with just two remaining tanks deliberately sabotaged one of them to keep from being sent into battle.

It’s very hard to plan an offensive if your command posts are getting blown up and your ammo dumps wiped out.

🇺🇦 Paul McCartney waved the #Ukrainian flag as he kicked off his 2022 world tour in Spokane, Washington.

On April 28, 2022, the Beatles star & solo artist performed a two-and-a-half-hour set to fans attending the U.S. concert, including many of the British band’s greatest hits. pic.twitter.com/tAcu6quYjV

Back to Canada again, I think this is an outstanding concept:

And finally, some humour to finish off tonight:

The future is bright. Unfortunately, that’s not where we’re headed.

Employers love teamwork until it leads to a union.

I wouldn't be surprised if the abortion draft was leaked by its author or his staff. It's a deeply unpopular and poorly reasoned opinion that could be used to strip away other recently won rights, such as gay marriage or even Thomas' interracial marriage. Leaking the opinion allows Fox to feign outrage at the leak and avoid the substance of the opinion. When the final version is released they'll claim its old news and continue to avoid discussing it.

Nice quip from Hugh Laurie! If you only saw him playing Dr House on TV, you may have come away thinking he's American. He's not. He's English, educated at Eton and Cambridge, and a former member of the comedy duo Laurie and Fry. He worked with a voice coach before auditioning for House and producers didn't even realize he was English until it came time to sign contracts.

Thanks Cap.
Yes, considering the freakout when Roberts aligned with the same sex marriage opinion, I believe it is possible that the Alito draft was leaked to prevent any of the five from reneging now. If so, maybe it will boomerang and actually cause one of them to change or rewrite to make the opinion much narrower.
I hadn't realized that info about Hugh Laurie -- we liked him in House originally but the scripts just got too repetitive and his character increasingly nutty.
(Also, a minor point, but nobody had ever showed the show producers that he was using his cane incorrectly -- he used it wrong through the ENTIRE SERIES!)

And, Hugh Laurie was on Blackadder.
UU