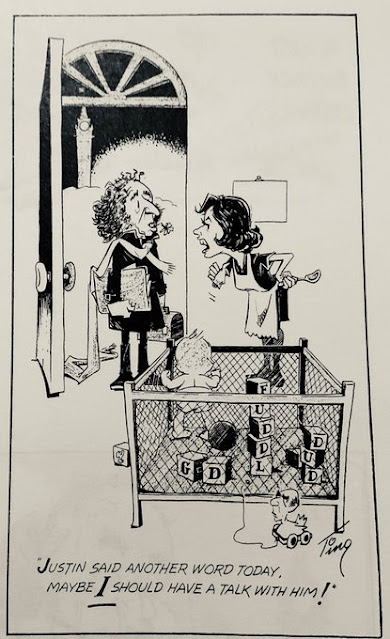 Trudeau dropped the f-bomb when he apparently got fed up with stupid Conservative conspiracy theories about a Canadian Forces surveillance plane that flew over Ottawa on Feb 10, during the Trucker Insurrection  - just proving how very very mean Trudeau really was to those poor poor truckers, I guess.
It's all so stupid it makes me tired to even write about it so I can imagine how pissed off Trudeau is to put up with the constant catcalls and meaningless smear tactics from the Conservatives. He snapped. I don't blame him.

Turning to Ukraine, I thought this was an interesting observation today:

Ukraine is getting completely new systems, better than anything it had in the war. Ukraine now has 90 percent of the howitzers that were promised by the USA, some of which are already in action. https://t.co/kMJfyrB7NK

Even Ukraine's trucks are new:

This is an ambush surprise waiting for Russian helicopters https://t.co/pkKQIQ3Zdw

Here's another flex by the United States against Russia:

"The United States has provided intelligence that has helped Ukrainians target and kill many of the Russian generals who have died in action in the Ukraine war, according to senior American officials."https://t.co/7Xo8kFIfog pic.twitter.com/gIYzvo5Rbe

The US is, I believe, releasing this kind of news story to push Russia toward realizing they cannot win this war.
The fury about the intention of the Supreme Court to criminalize abortion isn't going to die down or go away. Today people were talking about how the Republican appointees - Gorsuch, Thomas, Alito, Barrett and Kavanaugh -- had  all lied during their confirmation hearings:

They all lied, to get on the court, so they could overturn Roe. The end. And here's the crazy part: some of us KNEW they were lying, and tried to tell folks what they were doing, but we were called "hysterical" and "dramatic." Just like with Trump. https://t.co/lT1r3n9FbG

It is worth noting also that nobody will ever again believe the assurances of a Republican nominee to the court.
Here are some people who vote Republican. Or used to:

Kids, I shit you not, I was driving home tonight past our local Assisted Living Facility and there was a small, yet agitated group of seniors on the lawn in front of a four lane road waving signs in support of #RoeVsWade.

And now of course everything will be up for grabs. Probably back to Brown V Board of Education:

And so it continues. The path we are on is clearly a dangerous one. https://t.co/YlfGkFY76o

This made an interesting point, too:

tip for the guys who think Roe's demise won't affect them: child support payments usually start at a quarter of your annual income

Rick Wilson always has something interesting to say:

I'm fascinated by the Johnny Depp/Amber Heard story, especially the part about the Republican Party nominating a slate of candidates for Senate and House who want to burn down our republic and replace it with an authoritarian kleptocracy.

May the fourth be with you, & Dave Brubeck May 4 is written "5/4," recalling the time signature of "Take Five", Brubeck's best known recording.

I actually saw Dave Brubeck play once, at a club in Toronto. This video was posted to YouTube by Tori Chitic - playing live in Belgium 1964, here is Paul Desmond (alto sax), Joe Morello (drums), Eugene Wright (bass) and Dave Brubeck (piano)
Congrats on this one - beautiful photo:

"I never would have dreamt in seven years that this is where photography would take me," said Deborah MacEwen, who is a Fine Art Wildlife and Nature Photographer.https://t.co/B2r69JmRAl

Mattea Roach is still winning on Jeopardy, as of tonight at least. She mentioned to Jennings the other day that she had been a Parliamentary Page one summer - so when I saw this tweet, I wondered how long it took the Archives staff to find this photo? Anyway, its cute, isn't it:

Finally, this was a sweet story:

GOTTA SEE IT: OH WHAT A MOMENT 🥲

Aaron Judge hits a solo HR and a young Yankees fan receives the ball from a Jays fan. 💙

The Blue Jays fan who made it all happen is Mike Lanzillotta, who received a signed George Springer jersey from the Jays. pic.twitter.com/6tJKLEmiYi