Today's News: The stupid, it burns! 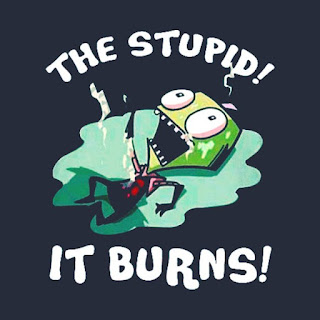 Evan Scrimshaw sent out a newsletter tonight talking about Skippy and the Conservative so-called "debate" last week and its worth quoting from:

... It's a busted ideology and a party infected by more than just bad opinions but stupidity at its core.
To save Canadian conservatism, you first have to be willing to have an honest conversation about its main ill. It’s not the pro-lifers or the social conservatives or the fact that the debate last week was impolite and loud.
Conservatism’s real ill in Canada is that it’s so fucking stupid. And until they fix that, they’re done for.

Why are you minimizing the incredible sense of FREEDOM I felt as I opted out of inflation and lost half my savings?!🤔

This is the proper response to virtually anything PP says #cdnpoli #Conservatives https://t.co/42EEJmiOYW

Here's the kind of quality governance that Canada is getting from Conservative MPs these days:

Moving to the most recent update from Ukraine:
First, some good news:

Putin now seems to want to transform his genocidal war into a frozen conflict in Ukraine. We cannot allow this to happen. Don’t lose focus. Total Ukrainian victory is the goal

Yes, I am concerned about this as well.
The War seems to be getting less international coverage every day now -- there is less action in and around Kyiv, where the journalists are, and there are other news stories in other places, like recriminalizing abortion in the United States.
As Russia loses ground and its army disintegrates, I believe it will be trying to create the impression that everyone in the occupied territory is happy happy happy:

In Mariupol, occupiers led by DNR Denis Pushilin marched through the city with a 300 meter St. George's ribbon. The city's residents did not participate, making this a perfect metaphor for the war since Putin doesn't think Ukrainians exist, anyway. https://t.co/EjoBxUp5Cc pic.twitter.com/lWrEVQgUjX

It concerns me that the world will lose its fervor to help Ukraine, and then Europe will want to let Russia keep its eastern and southern conquests before Ukraine can mount a massive counteroffensive this summer.
Here's a fascinating development, if true:

Russian human rights activists have formed a vast human chain that is helping Ukrainians transported to Russia to escape to the West, @theipaper can reveal.

Ordinary Russians are passing people, including Mariupol survivors, from city to city until they reach the border. pic.twitter.com/FHLHNbbTIy

🗣️ One activist in 🇷🇺 said: “There is an impressive grassroots organisation. Some put people up in their homes for a few nights, others buy train tickets and take them to the station. We are passing people on to groups in other cities, who are helping them get over the border.”

🗣️“That’s where the volunteers come in,” one 🇷🇺 activist said. “We get messages saying, ‘We’re a family with children and we need clothes. Can you help?’

We help as many as we can. I did a trip to some camps myself. People were allowed outside, but volunteers couldn’t go in.” pic.twitter.com/GJVh914fJz

Moving to the latest in the United States, the Republicans have gone mad. They have lost any sense of public service or looking for common ground:

GOP's march toward ever greater extremism shows no sign of being restrained, even by political logic. It's likely the party will enact a national abortion ban if it retakes Congress and the WH, despite the fact that a ban would be opposed by 60 percent of the nation's voters. https://t.co/HOLjK0yS1m

Love hearing about ‘the sanctity of life’ from the same people who have spent the last two years arguing that killing grandma is a small price to pay for being able to sit in an Applebee’s.

If Kavanaugh doesn't like the way people in his state are gathering outside his house, maybe he can just take off work and drive hundreds of miles to a different state.

The Steve Schmidt v Spawn of McCain saga is continuing into Day Two:

apparently it will be a trilogy

And on a side note, the uproar is educating people about just how many Russians have been attaching themselves like tapeworms to the Republican party during the last 20 years:

I don’t count myself among the well-informed political types, but I thought it was hugely weird that so many Russians were at the R National Convention in 2016.

Then Manafort being brought in. I think we are still wondering why criminal Manafort insisted on Pence.

And this is hilarious:

Bernier must have lost his briefing notes, again.

Yes, I thought it was priceless. I guess all those Maritime cities look alike, especially when you're not really paying much attention.