Today's News: We need to remember the ones we have lost

it’s not the ocean you hear when you hold a seashell to your ear, or your own heartbeat drumming and echoing back at you. it’s the ones you’ve lost calling to let you know they made it to the other side and they’ll be waiting around the campfire until you arrive, take your time.

More than 90 per cent of pandemic deaths in Canada have been in people older than 60 ....
There is no doubt that elders, especially those with chronic health conditions, or living in long-term care, are at far greater risk. In recent weeks, we’ve again seen a steady increase in outbreaks, and deaths, in long-term care facilities.
But let’s please stop with the too-often-uttered ageist nonsense: “They were going to die anyhow.”
Deaths from cancer, heart disease, COPD, diabetes and other things that routinely kill elders have not dropped one iota.
The tens of thousands of COVID-19 deaths are on top of that – additional years of life lost.
Governments have largely stopped collecting and publishing data. But the hospitalizations and deaths won’t stop just because we avert our gaze.

Avert? Yes, that's exactly what we are doing.
Today I saw some incredible statistics about how many extra Saskatchewan deaths we have had
in the last two years:

Dr. Ogieglo notes that in addition to Covid deaths, people have been dying earlier of other
conditions. Here are some additional figures:

This is a graph that I have shared previously that demonstrated that we are on pace to exceed the 2021 COVID death toll this year. In 2021, COVID took 802 lives in our province. We are on pace for closer to 900 deaths for 2022. 4/11 pic.twitter.com/h7HwviEXkl

All to say, COVID is still causing a large burden of death in our province. We have deployed vaccines (with less than ideal uptake of booster doses), and accessible rapid tests as well as early therapeutics but we are not using any other tools to reduce this burden. 6/11

The WHO has recently released a report which calculated a world excess death rate of 15 million
in the last two years - here is their main chart:

Again, many of these extra deaths were undiagnosed COVID cases, but also these figures include deaths from other conditions which might have been treatable if the health care systems hadn't
been overwhelmed with COVID cases.
Here is a chart from the BBC based on the WHO statistics: 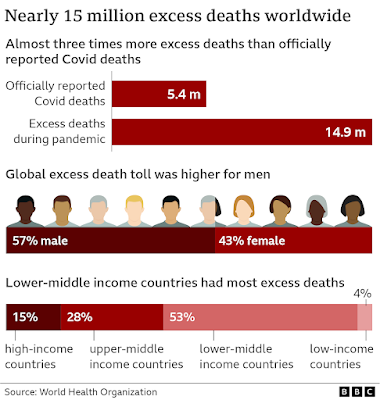 I know we all want to "move on" from Covid, but we also need to remember the people we
have lost.
In other news:

Tristen Durocher gets to meet with @JustinTrudeau even though @PremierScottMoe would not meet with him https://t.co/l3S5nZg10x

Tristen Durocher walked 600 km from LaRonge to Regina in 2020 to raise awareness of teen
suicide in Northern Saskatchewan. News stories describe the award here, and the background here
and here. In the LaRonge Now article, Durocher describes his visit with Justin Trudeau:

“I told him about Saskatchewan, how in the north from ages 13 to 45, the leading cause of death is suicide and how that wasn’t acceptable,” Durocher said. “He did listen, he was very sincere and he seemed compassionate and genuine.”
The two also discussed art and music and how they have the capacity to be healing. Trudeau told Durocher that art doesn’t only have to function as a mirror, that it can also be a lamp.
“I think what we meant by that is art just doesn’t need to reflect the grief or the heartbreak within certain spaces, but it can serve as a nightlight or a source of inspiration or hope,” Durocher said. “I was telling him how music is really good at articulating emotion, so when students learn their instrument and music, they learn to have this musical vocabulary that they might not have the words for.”

And in other news, I found this one amusing:

Justice Alito wants to ban all gay civil rights because, he claims, there were no LGBTQ people in existence when the Constitution was written. They arrived in America later with the first tour of Cats

So yes, let’s deal w/the insane access to weapons of war. But don’t say “it’s all about guns.” Because they used to hang us from trees in front of the courthouse.They have killed us w/swords in Manhattan, dragged us behind cars in Jasper, Tx. They have beaten us to death.

And I appreciated Oswalt's observation too:

Not much news on Ukraine today, but I thought this was interesting, because Putin had been
talking as though Kherson is basically a Russian city now. Not so much, I guess.
Also, Melitopol:

Our Russian in #Kherson reports that the level of paranoia among #Russian troops in the city is through the roof. They don't trust their officers, they don't trust their comrades, they constantly look over their shoulder, and always move in groups at night. The stories about the

they're not feeling in control of the situation. The visits from FSB torture squads and mass arrests are a strong indication that they're rattled deeply by their inability to impose their will on the region.

in an ancient culture was a femur (thighbone) that had been broken and then healed. Mead explained that in the animal kingdom, if you break your leg, you die. You cannot run from danger, get to the river for a drink or hunt for food. You are meat for prowling beasts. No 2/4

Helping someone else through difficulty is where civilization starts, Mead said."

We are at our best when we serve others. Be civilized.

And the Battle of Alberta is ON!

"You dream about stuff like that, scoring in Game 7 in overtime.”

Johnny Gaudreau didn’t hoist the Flames on his shoulders but when Calgary needed him most he was there, ending a torturous evening for a C of Red. (By @EricFrancis )https://t.co/rJV7UoulxH

Too bad only one of them will go on to the next round.
Posted by Cathie from Canada at Monday, May 16, 2022

I'm leery of the media narrative that "more than 90 per cent of pandemic deaths in Canada have been in people older than 60." I bet over 90% of deaths are in people over 60 in any case, even pre-pandemic. That stat doesn't tell us much about the risk of Covid, which is among the top 5 causes of death even in young people. But from what I can see, most people would sooner risk their health than wear a mask to shop.

Thanks for your comment. There is more detail at the links about the death percentages. I think the "90%" figure also explains why our society seems to be so ready to "move on", and why we are in denial about how serious Covid really is. It is Long Covid that frightens me, too.
I have seen some commentary that the world should expect to see a decline in overall life expectancy rates, just because of Covid.