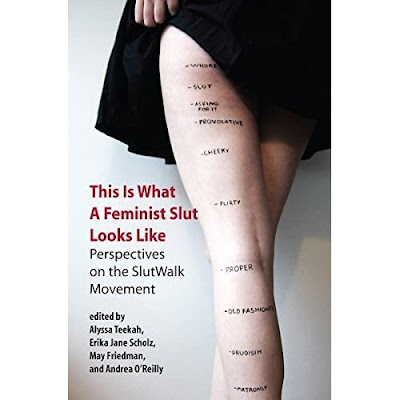 Here's the cover photo of 2010 book about the SlutWalk Movement -- just thought I should help out that Ottawa school trying to "measure" the shorts and skirts of its female students today.
Maybe if they used this photo as their guide, then their female students would know exactly what their school thinks of them.
And maybe the next time the students protest, just set up a bouncy castle to keep the police away too.
This is how it started:

I’m so ashamed I attended this school.

They did this to my sister. I’m disgusted. pic.twitter.com/Lb1fzz2Unv

It seems as if they’re now arresting students. More to come pic.twitter.com/UoGHLcwlXK

Hearing reports 3 students each got an 150$ ticket for walking in the street.

Ottawa Police later sent out a pious set of tweets about how a student from another school was sort of arrested for trespassing and its not our fault anyway.
But Ottawa was not impressed - the people of Ottawa have NOT forgiven or forgotten how badly their police force let them down just four months ago:

Truckers get a pass for sh*thing in the streets…students get arrested for peaceful protest of bad rules. Got it.

No, no they were not. They were aggressive with me, a Centretown resident, when I took to the streets to yell at the occupiers after not having slept for 5 days because of the noise... The red carpet was rolled out for people who don't live or pay taxes here, while we suffered.

After living through a 28-day illegal occupation w/ trucks parked across downtown streets & people being harassed, threatened and assaulted with no action…this response to kids sticking up for their female classmates who were harassed for their choice in clothing is astounding. https://t.co/lTBM64qaVW

Based on the reporting I am seeing, three things seem clearer now about the SCOTUS "leak" of the Alito draft re-criminalizing abortion:
1. Roberts is trying to assemble a coalition to dismantle Roe v Wade partially but not completely, so that abortion would still remain legal below a certain level of "viability" (12 weeks? 15 weeks?)
2. The leak of the Alito draft was an attempt by the Alito/Thomas camp to play politics, so that Barrett, Kavanaugh and/or Gorsuch wouldn't switch sides to support Roberts, and
3. SCOTUS doesn't play politics very well.
In releasing the draft, they thought they would get cheers from pro-lifers and a little grumbling from everyone else. But 200 million Americans are now very very angry, Republican state politicians and Fox pundits are starting to run away from the issue, and federal Republicans are furious that the Democrats may now have a winning issue to increase turnout and retain control of the House and Senate in the mid-terms.

It's become pretty clear the leaks about internal Court deliberations (if not the draft opinion itself) are from the Thomas-Alito camp, and are designed to weaken the Chief Justice and intimidate any of the newer justices from joining him for fear of seeming weak or unprincipled. https://t.co/r5KRJOwUmt

📈 Feel abortion should be legal in all or most cases (from net +14 to net +22) pic.twitter.com/F3AdJQ5Dpc

It’s also good news that more Democrats are embracing the idea of making the election a 1:1 referendum on codifying the right to abortion—give us two more senators and the House, and we’ll fix this next January. But the leaders aren’t there just yet. https://t.co/1PAHjokwRQ pic.twitter.com/dv4AiMNKrV

Oh wow. The Lancet — one of the most prestigious medical journals in the world — is out with a forceful statement about Roe v. Wade *on the cover*. pic.twitter.com/foqLq4DWic

And isn't it terrible to realize the kind of people who are now going to be making US Supreme Court rulings for the next quarter century. I don't know if Biden could ever be convinced to expand the Court but if he doesn't the nation will regret it.

Justice Alito can’t help himself. It’s not that he’s more candid than his tight-lipped colleagues: he’s as deliberately misleading as any of them. It’s just that he has a distinctive mean streak that sadly reflects itself in his substantive constitutional philosophy. https://t.co/dQvnMJwe1G

Regarding Ukraine tonight, its becoming clearer every day that the Ukrainian Army is pushing Russia back.
Tonight Markos shares this map showing how Russia's attempts to take Ukrainian territory and encircle Ukraine troops have declined every month since the war began, and will soon be reduced to almost nothing: 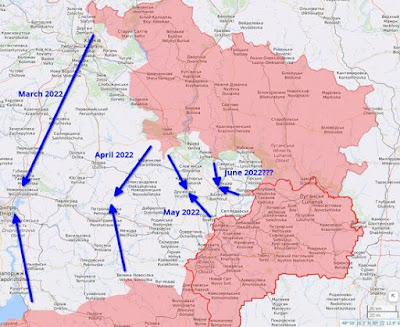 Russia’s slow pace of advance now ensures this war will last well into this year (and likely longer), allowing time for a full Ukrainian transition to NATO-standard weapons. Indeed, Ukraine General Staff is arguing they can be fully transitioned by the end of summer. That may be little consolation to those who would rather see peace break out, global food deliveries re-established, an end to needless death, and money spent on more fruitful endeavors than weaponry. But Vladimir Putin cannot retreat now without delivering the glorious (and easy) victory he promised his nation, and Ukraine sees no reason to surrender given Russia’s sorry battlefield performance.
It really believes (and I agree) that with the right gear, it can recapture everything lost to Russia since 2014, including the entirety of Donbas and Crimea. And as long as the Ukrainian people are prepared to make that sacrifice (and they appear so), it makes perfect sense for the West to help it achieve its goals.

Yes, everything is saying Ukraine has won the Battle of Kharkiv.
Russia is about to leave the city’s surrounding area completely to prioritize its problematic axes in Izium and Severodonetsk.
Remember the Russian conquest bravado from 2 months ago?

The Russian army has lost almost an entire battalion as it tried to cross a river in eastern Ukraine https://t.co/hilKBhgIqG

The U.S. continues to see signs that Russian troops and officer are failing to obey orders or not fighting aggressively in the Donbas: senior U.S. defense official

Putin and his army are not “cornered”. They could leave Ukraine at any time. Putin is a dictator. He does not need to “save face” in front of anyone. He could declare victory and order his troops home today, without any fear of someone or some group seeking to topple him.

It doesn't really need to be stated, but Edmonton is horrified at this vandalism - and as the attached tweet shows, this is not at all what Canadians or Edmontonians actually think at all.

Unfortunately, there are always a few people like this- and they tend to do such things to get attention. Edmontonians have been big supporters of Ukraine. https://t.co/ZeyIwv9HR2

Getting back to the Conservative leadership race, EKOS Research Frank Graves has released some new stats and here's an interesting table: 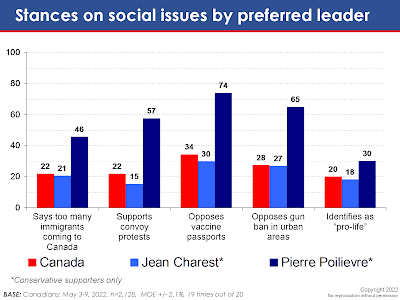 CPC and PPC base appear poised to elect Pierre Poilievre. Careful multivariate analysis shows outside of CPC and PPC supporters he has zero support. Charest and possibly Brown have huge opportunities outside current base. Much better chances of winning an elxn , not leadership.

So if you are in the shrinking minority who deny climate change, detest direction of country ,open to right to life , think masks/vaccines are a bad idea, love the neo-freedom of seditious convoys, pro gun rights and so on .... I have a leader for you !

On a side note, Elon Musk is really getting more ridiculous every day, isn't he:

He’s now looking for ways to get out of the contract. Shocker.