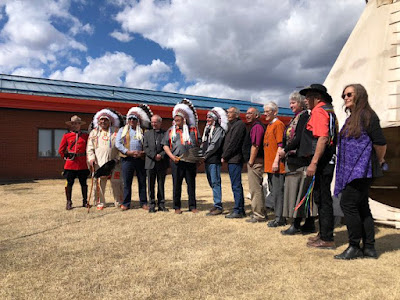 Today the Archbishop of Canterbury Justin Welby arrived in Saskatchewan, to apologize for the Anglican Church role in Canadian residential schools.
The official photo is above and I'm sorry that I couldn't find a list of the Chiefs, Elders and others in this group.  Archbishop Welby is fourth from the left and I think Elder Dennis Sanderson is beside him, third from the left

“A significant purpose of this visit is therefore to repent and atone for where our relationships
and actions have done more harm than good” says Welby.https://t.co/OoDwokQGxr

Welby visited James Smith Cree Nation along with Chakastaypasin Band of the Cree Nation and Peter Chapman Band. and tomorrow he will visit an Indigenous Gathering at the Prince Albert Exhibition at 2 p.m. after Sunday services at the St. Alban’s Anglican Cathedral:

The Archbishop of Canterbury has arrived #Sask pic.twitter.com/YjoaOslM3x

Members of James Smith Cree Nation lead the Archbishop of Canterbury into to community school for a meeting. pic.twitter.com/fpUUOoEV0J

“How can we dismantle the Doctrine of Discovery in a way that it can never be used again?” asks the Archbishop of Canterbury Justin Welby in James Smith Cree Nation. pic.twitter.com/FIzgCFeEUc

The Archbishop, holding an eagle feather, is now listening to survivors.
I won’t tweet the specifics so will just say survivors are detailing a range of abuses they suffered, including physical, emotional and sexual.

Here are some of his words of apology:

“I am sorry. I am more sorry than I can say,” Welby said. “I am ashamed. I am horrified. I ask myself, where does that come from — that evil. It has nothing, nothing to do with Christ.”

BREAKING: Archbishop of Canterbury Justin Welby issues first ever global Church of England apology to residential school survivors here at James Smith Cree Nation. “I am sorry. I am more sorry than I can say. I am ashamed. I am horrified.” pic.twitter.com/nsKafz9ImO

It has been a long time coming.
In other news, the White House Correspondents' Dinner was tonight.
"Washington is Hollywood for ugly people" was apparently said by Paul Begala back in the 1980s about this annual dinner - also known as Nerd Prom.
Tonight was Biden's first dinner, and he got in a few good zingers:

“There’s nothing I can say about the GOP that @GOPLeader hasn’t already said on tape” @JoeBiden.

“The GOP support this guy Brandon. He seems to having a great year.” #whca

I didn't watch very much of it, but I didn't hear about any pearl clutching moments.

As Washington prepares for tonight's White House Correspondents' Dinner, I would like to take this moment to remind you of how this city lost its collective mind when Michelle Wolf made some jokes about Sarah Huckabee Sanders's eye shadow. #pearlclutchcity

Though, of course, I'm sure the Repubs will search for something to be offended about. Three...two...one...

Trevor Noah ends with a charge to the press. "If Russian journalists ... had the freedom to write any word, to show any stories, or to ask any questions — if they had what you have, would they be using it in the same way that you do? Ask yourself that question every day..." #WHCA pic.twitter.com/qt6DJRKKUk

Turning to the right, we see Rolling Blunder arrived in Ottawa today.
They weren't allowed to roar past Parliament revving their motorcycles and giving Trudeau the finger, poor babies, so they just had to hang around the war memorial and listen to speeches, and then leave, ho hum....

"What do we want?"
"All COVID restrictions lifted"
"When do we want it?"
"Last month when it happened" #OttawaOccupation #RollingThunder

Freedom of speech for me but not for thee. It’s the Conservative way.

My rough guess is that there's 2,000-3,000 people in downtown Ottawa right now. Some are watching the speeches (which are...assorted), many are lounging on the grass, others are arguing with counter-protesters.

And here's a quick update on Ukraine tonight.
I thought this was beautiful:

One thing I am noticing about this war is that the print and broadcast media seem to be several days behind what I am reading on twitter and on blogs about this war. I get the impression that only recently has the world been realizing what Russian soldiers are likely doing to those Ukrainians trapped behind the lines.

"The only thing standing between the perpetrators of Butcha, Borodyanka, Mariupol and their potential future victims at this moment are the Armed Forces of Ukraine." A reply to all who confuse peace with subjugation of #Ukraine. Furious #Thread /1https://t.co/PW6AgT8hHH

“Russian forces appear increasingly unlikely to achieve any major advances in eastern Ukraine, and Ukrainian forces may be able to conduct wider counterattacks in the coming days,” @TheStudyofWar says now.

The introduction of Western artillery is expected to accelerate a tactical shift by Russia and Ukraine to employ what is known as counter-battery fire, in which military forces seek out their enemy’s artillery, determine its location and attack.
https://t.co/ehyisghoTZ

Now Ukraine is taking the fight to Russia, without announcing it:

A month into the war, Ukraine began attacks on Russian territory, fires at fuel and ammunition depots suggest, but Kyiv has a policy of ambiguity. The explosions are "just a completely wholesome, natural process. Karma is a harsh thing,” says one officialhttps://t.co/Jx5RcIWJI0

And I thought this was an interesting development:

Japan appealed to Indonesia with a PM visit to get Russia out of the G20 and is now trying to counter Russia’s partnership with Vietnam, which is its strongest in Southeast Asia

The Russian war crimes are horrific. Russia is now shipping hundreds of thousands of Ukrainians to Russian concentration camps and onward into Siberia - perhaps all the better as they loot and pillage the captured Ukrainian towns and cities,:

Russia is establishing concentration camps in occupied territories in Ukraine where selections, or filtrations, are made. Torture and imprisonment, deportation or death are potential outcomes from the filtration process. https://t.co/hqb1ELh8KE

The UN was able to send some trucks into Mariupol to get about 20 women and children out today.

Sir, UN didn’t ask to evacuate, they TOLD Putin they will evacuate. And RU will do nothing.

This is an example of speak softly but carry a big stick.

(Wife worked at UN and still has friends there. This is a middle finger, in addition to humanitarian mission).

I hope they can do more. And finally, Ukrainians are remembering those they have lost:

A person in Lviv this morning stares at portraits of people murdered by Russian soldiers.

Many of the portraits are children. pic.twitter.com/zHBCjRkIiR