Today's News: Waiting for the other shoe to drop

Waiting for more shoes to drop:

There is non zero chance they shot one of the kids. Why else make this statement oh yeah it will get worse. https://t.co/xaVehvFMug

The careful phrasing of "shot and killed" may be a tip off.
Here's the best story I have seen describing the chain of events in the school:

The Parkland Cops ran away. The Buffalo Cop was killed instantly. The 3 Cops at Uvalde were overpowered, then waited 40 min to enter the school.

When the NRA has lost Jon Voight:

I did not see that coming. https://t.co/0XQ2VjGIPj

Here's a photo from the NRA convention in Texas that's getting a lot of comment:

You got it all wrong. He was just giving his best impression of the cops who stood in the hall while children got shot. Between the rounds going off and the cries of children, you have to believe they too covered their ears.

I don’t wish to sound apocalyptic about this, but one has the sense that at present our society is simultaneously characterized by wildly disproportionate accountability for trivial transgressions and zero accountability for profound institutional failure.

In his Eschaton blog, Duncan Black flags another instance of journalist team-playing masquerading as objectivity:

People bathed in the census Washington Consensus just assert their beliefs are popular. It is extra funny as those centrists threw their lot in with a bunch of guys pretending to be data nerds, who also just pick and choose polls and ignore them when they are inconvenient.
Abortion is popular. More gun laws are popular.... how supposedly neutral journalists torture polls to fit their narrative is the easiest way to know which team they're playing for. I don't mean bias or preconceptions, I mean literal team playing.

Here are the polls he is referring to:

my brother in christ your data shows that more than half of americans want MANDATORY BUYBACKS https://t.co/FM6f8xteOf

"What you can see from these numbers is that 6 out of 10 Americans directly support limiting the right to buy certain guns or ammo"
There, fixed it for ya!

Checking in with Ukraine, I notice that the news headlines are running at least a day behind the military tweeters in terms of telling us what is going on. Tonight, headlines are talking about Russia making some advances, but the military analysts are past that already.

ISW- "The Russian invasion of Ukraine that aimed to seize and occupy the entire country has become a desperate and bloody offensive to capture a single city in the east while defending important but limited gains in the south and east."https://t.co/YMvJ8wWiyl pic.twitter.com/9ewcNVOHjB

The piece by the Institute for the Study of War continues:

...When the Battle of Severodonetsk ends, regardless of which side holds the city, the Russian offensive at the operational and strategic levels will likely have culminated, giving Ukraine the chance to restart its operational-level counteroffensives to push Russian forces back.
Russian forces are assaulting Severdonetsk even though they have not yet encircled it. They are making territorial gains and may succeed in taking the city and areas further west.
... Seizing it will let Moscow declare that it has secured Luhansk Oblast fully but will give Russia no other significant military or economic benefit. This is especially true because Russian forces are destroying the city as they assault it and will control its rubble if they capture it.  ...

Lots of reliance on artillery (not surprisingly). Though wonder if the Russians are running out of the mass of front line armor and APCs needed to advance. Has been a noticeable decline in Ukrainian claims of Russian losses the last week. Will tweet more on that tomorrow.

Using my completely unscientific analytical measurement to track the course of the war (the number and boastfulness levels of pro Putin trolls), I would say the war might not be going as well for Russia as the current wisdom was claiming a few days ago.

Cry me a river!

No Visa, Mastercard, iPhone, or McDonald’s, crowdfunding for drones, and sending toilet paper to the troops:

The Kremlin's mouthpieces who hyped up the war in Ukraine are now having a pity party over the crushing impact the conflict has had on Russia.https://t.co/23hunIGmkH

I was thinking about putting a Biden flag on my yacht, but then I remembered that I don’t have a yacht, and I’m not in a fucking cult.

Speaking of yachts, this photo of  yacht sunk after a collision during a Trump parade will never not be funny: 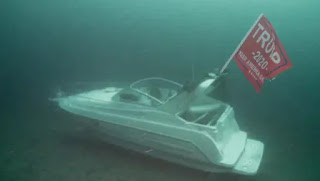 Oh, and today Musk announced he has called off his Twitter acquisition plan. Again. So Trump ain't coming back.

I am discouraged when I see an old person, then realize we went to high-school together.

And I never thought Snapping Turtles could be funny, until this:

So let me tell you about this snapping turtle who tried to get me and him killed today
🧵
1/ so went to the back deck to feed the squirrels today and saw this Jurrasic Park looking bastard chilling at the back step .
I figure I won't bother him he won't bother me right ? pic.twitter.com/6MDdxLOTFB

Whenever you have a hour or two, just keep scrolling through these replies and hum along with the greatest songs of the last 60 years ... https://t.co/SNRkmfJhsN

I had aa good friend who used to say "You can always tell a cop, but you can't tell him much" and then laugh his head off. I now think he was on to something.

Yes I think they have lost the benefit of the doubt everywhere now.